Fredericks & Freiser is pleased to announce an exhibition of new work by Douglas Kolk. Known for his channel-surfing aesthetic, Kolk splices together familiar imagery and furious gesture to create large-scale collage and deviant sculpture. Whereas his early line drawings depict a stark and fragile youth culture, his recent work illustrates a manic utterance of contemporary life. This will be the artist’s second solo exhibition at Fredericks & Freiser.

Kolk vehemently portrays his world with fluctuating notions of the self. Edged with an almost child-like imagination, he identifies his fragmented musings with an amalgamation of images. Combining media clippings, delicate drawing and untamed abstraction, Kolk delineates this intrinsic language. Whether he depicts the introduction of a man and a woman scrawled across pages of newspaper circulars or myriad impressions of rural life as experienced from a speeding car, Kolk takes gentle ideas and electrifies them.

About the Artist
Douglas Kolk (born 1963, Newark, NJ) grew up near a nursing home headed by his father, a Baptist preacher. In the mid-90’s he had solo exhibitions at David Zwirner, New York; and Stephen Friedman Gallery, London. He ceased his artistic work in 1999 as a result of excessive drug consumption and started working again only in 2004. Since then he has been included in group shows at Kunsthalle Manheim; galerie du jour agnès b., Paris; and The Royal Academy of Arts, London. He has had solo shows with Arndt & Partner, Berlin and Zurich (who began showing his work in 1994) and the Kunstlerverein Malkasten, Dusseldorf. He is included in the permanent collection of the Museum of Modern Art, New York and the subject of a monograph published by Hatje Cantz. This is his second solo exhibition at Fredericks & Freiser. 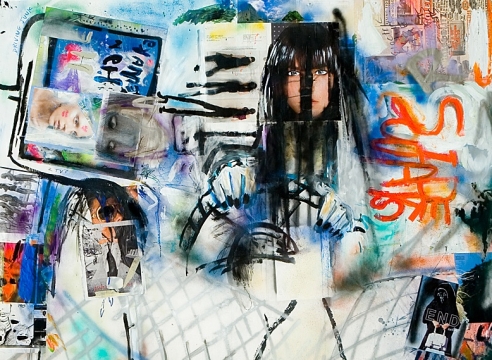