Jessica Fredericks Gallery is pleased to announce an exhibition of sculpture by ROBERT OVERBY. Mr. Overby’s work dates from the late 1960s to the late 1980s, and was seldom exhibited during his lifetime. Since 1995, his latex casts of architectural elements, paintings, objects, and drawings have been the subject of exhibitions at Burnett Miller Gallery, LA, and Jessica Fredericks Gallery. He was included in Scene of the Crimecurated by Ralph Rugoff at the Armand Hammer Museum, and Rubbercurated by Anna O’Sullivan at Robert Miller Gallery. In 1997 his work was added to the permanent collection of the Whitney Museum of American Art. This will be the artist’s second solo exhibition in New York and the first to focus on his Barclay House Series.

On October 5, 1970, Robert Overby began casting doors. The first piece was cast in polyvinyl chloride and titled Madonna Door. Marked by a pregnant swelling popping out from its center, the piece immediately established the artists connection between architectural geometry and the human body. Mr. Overby then moved on to other materials including concrete and steel, and polyester resin and fiberglass before casting his first door in Latex rubber on May 13, 1971.  Four months later, on August 4, Overby entered an abandoned, burned-out building and began casting the charred walls, doors, broken windows, etc. In a single day, he cast twenty-seven elements of the Barclay House, ranging in size from a thirty foot wall to a fifteen inch door of a chest of drawers.

Though several of the pieces were destroyed by the artist before he passed away, the remaining castings represent the wide diversity in texture, color, size, and subject that were addressed on that one day. They focus on a rich and painterly surface that foreshadowed the artist’s future abstract and figurative works on canvas (he was to stop casting in 1972). They are also involved with a human space and what Ralph Rugoff calls, “a ghostly trace or negative of an arena redolent of disorder and violation.” Five major works were selected for this exhibition. One piece is a casting of a single door, the other, larger works, are castings of walls or door-jams that define the empty space of missing portals on the stark white gallery walls. 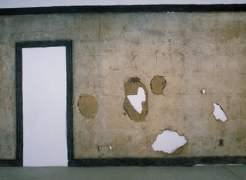