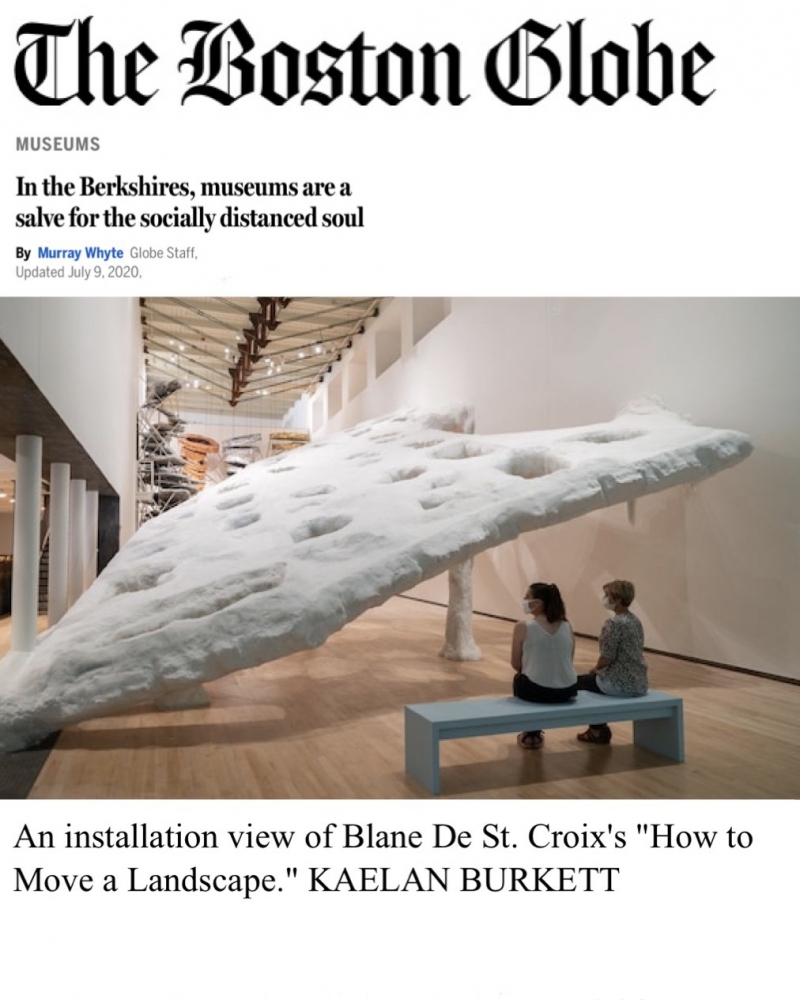 Mass MoCA being Mass MoCA, there's no soft reopening here. Before the pandemic, the museums had Blane de St. Croix's "How to Move a Landscape" on the books.  In typical Mass MoCA fashion, it's big. Very, very big. Just past the foyer, a thick four-foot-high wall that looks exhumed from the earth itself cleaves the corridor in two, topped by a toy-train size model of the border fence between the United States and Mexico - political time verus geological time, with no question of what prevails. In the soaring gallery just beyond a huge slab of synthetic permafrost - like half-a-football-field huge - is tilted on a precarious angle and riven with gaps that made me think of open sores. The visual presentation suggested as much - odd shaped and dangling bits, devolving before your eyes. De St. Croix, who has traveled with climate scientists to both poles, knows first-hand that the change is that immediate, visible, and dramtic. What he's brought here, at massive scale, is just a snapshot of a scene so vast and nightmarish it defies imagination. Worse, we won't have to imagine it - it's already here, in our warming world and rising seas, getting hotter and higher day by day. Is it respite to be distracted from one global crisis to another? Maybe not, but my whirlwind one-day tour to the Berkshires this week put me back in the world with the snap-to I needed. The pandemic has revealed so much wrong, right in front of our noses - crucial equity issues, from health to housing to work to a deep rot at the core of our militarized police force - it's been hard to see beyond that near horizon. "How to Move a Landscape" is the proverbial bigger issue - that no problem gets solved without a livable planet on which to solve it. Not an uplifting message, no. We have a lot of work to do. Maybe, with energy generated by social movements the pandemic brought to the fore, we'll have the will to do it.