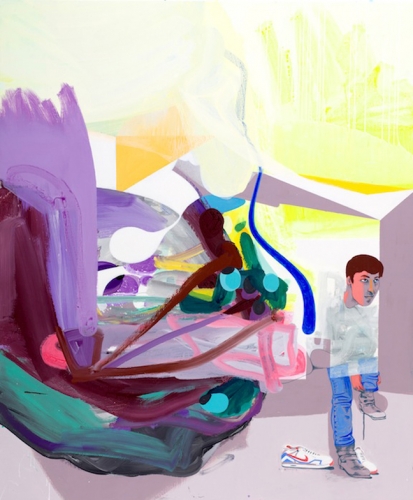 David Humphrey is a jolly image-smasher.  Since the early 1990s he has been notable for paintings of surreal sexiness, postmodern snap, and painterly discrimination.  Overall, there has been a consistent trend from the small and dense to the large and loose.  Some of the loosest paintings yet are currently on display at Fredericks & Freiser; the thinning atmosphere might explain the space helmet on the astronaut who appears in a couple of them.

In Scratcher (2012), for instance, a sleeping orange man has been severed by a huge blue-gray swipe that’s as feral as a Cy Twombly scrawl or an Albert Oehlen smear.  A zone of elegiac translucency surrounds the sleeper’s foreshortened, Transavanguardia-esque head and exposed nipple.  But the close harmony is shouted down by another huge swipe, this one icky-green, which dominates the upper right.  Below, a flagstone barbecue bolsters a black cat succubus who exacts vengeance on the orange man, or his sleeping bag, or body bag, as it continues past the gray swipe’s amputation.  The cat, whose eyes combust with infinitesimal fireworks, tracks bloody claw marks into the orange, reclaiming it from the calamity of abstraction.

Perhaps the artist’s own 1994 review of a Carl Ostendarp show (reprinted in his smart and lively collection, Blind Handshake) let this particular cat out of the bag:

His work encourages us to wonder if abstraction’s traditional aspiration to inhabit a space outside language has become a point of ridicule. Is a burlesqued form of that aspiration the new way of sustaining it?

And here is Humphrey in a complementary vein on Jörg Immendorff (2007):

Bigness, for Immendorff, was always complicated by crappiness, which, in the vernacular of ’80s German painting, indicated critical distance combined with a refined anarchistic connoisseurship; the artist must not show too much interest in the painting’s quality or risk betraying its radicality.

Put these two insights together and you get something like Humphrey’s new work: paintings that are acerbic and tangy, and resolve, if they do, only at a “critical distance.”  Which is the closest we can get, the paintings argue; nowadays it just isn’t possible to probe true feelings, even exalted ones, or base ones, without first seeing them for the mediated texts they really are.

Irony in Humphrey’s hands, though, is just a starting point for a risky and committed involvement with the karma of the medium.  I see him as a poster boy for the Democracy of Postmodern painting: Sure it’s the absolute worst form of art — except for all the others.  Humphrey’s “crappiness” is exactly what hones the claws of the cat in Scratcher.  She­ is desperate for a toehold at the very threshold of prowess.

Other paintings come down at different points along the spectrum of control, as if rehearsing the history of painterliness.  Kicking Back, (2012) is as cool and masterful as anything Humphrey has done, despite the aggressive presence of a huge brown smudge.  That’s because the smudge hovers within a hierarchy of signs: it can work as a POV depiction of one of those relaxing puffs after a tough day at the office, exhaled by the owner of the receding blue slacks (implicitly the viewer) who plays footsie with her Manolo Blahniks. The upturned floor’s consolidated whiteness, color-boosted with a yellow gradient, wafts the brown smudge right against our eyes, where it functions surprisingly well as Rembrandtian brush-smoke.

The fleshiest brushwork in the show, and also the most diagrammatic, can be found in The Red and the Blue, (2012) a complex homage to De Kooning, adapting the master’s signature late palette — with strategically placed eyeballs and tears, misregistered glyphs, leftover body crevices, and a possible fart joke added for spice.  Pink Couch, (2012) features, hanging over the furnishing of the title, a Magrittean painting within a painting.  The gag here is that this school-of-Resika landscape is stolidly fluffy while everything outside the frame is John-Wesley superflat, notably a cartoon cutie pie of color — a dubious composite, perhaps, of Manet’s Olympia and her African attendant, complete with cat.  (Is she teasingly covering up, or cowering?)

Humphrey is able to engineer pronounced stereo separation, in many of these paintings, between mess and mastery, between mimicry and mockery.  He dials it up to 11 in Changing Sneakers, (2011) which hurls an enormous abstract pile-up — Thomas-Nozkowski-meets-Amy-Sillman-as-crushed-by-John-Chamberlain —  at a light-struck figure shedding his photo-crisp Nikes.  But the determined young hunk lifts his eyes in another direction.

Everything about the clean-cut bantam in Changing Sneakers reminds me of Dustin Hoffman’s character, Ben, inThe Graduate.  Humphrey himself invoked the iconic scene in which Ben is accosted with friendly career advice — “Just one word….Plastics” — in an essay on the sculptor Ian Dawson, who deforms plastic toys, just around the time of his own switch from oils to acrylics; his paintings ever since have been doing R & D on survival skills for “a world now more dramatically polymerized than anything those 1967 characters ever imagined.”

Acrylic surely has its weaknesses: it lacks, of course, the viscous, flesh-like luster of oils — also, for that matter, oil’s tendency toward mud, which in some hands is a renewable resource.  But Humphrey does not reject acrylic’s sickly pallor out of hand, and casts his lot with its plasticky strengths: chiefly, that it dries fast, allowing an artist with racing thoughts to stream consciousness.