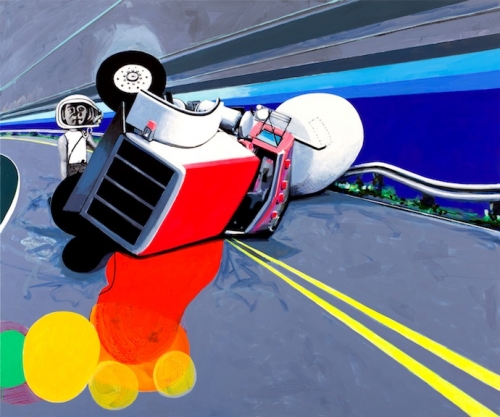 For a while in the late 1990s David Humphrey was engaged in a fascinating collaborative project with two other painters, Elliott Green and Amy Sillman. Working under the moniker of Team Shag, these three New York artist-friends would pass canvases back and forth among themselves, gradually building up weird amalgams of one another’s subject matter and style. Although Humphrey’s new paintings look nothing like the productions of Team Shag, they possess a sense of multiplicity, of the canvas as a place where diverse painting practices can coexist, which suggests the continuing influence of that short-lived experiment.

In most of the paintings, big abstract forms and explicitly figurative elements jostle alongside each other for the viewer’s attention. These abstract elements can be biomorphic blobs as in Hoodies (all works 2012), a winter landscape featuring a huddle of hoodie-clad youths, or sweeping gestures as in Scratcher, where a malevolent black cat is clawing a bloody, prone human figure while wide painterly brushstrokes loop in and out of the scene. In other works, such asChanging Sneakers, in which an oddly truncated young man is fiddling with his footwear, the tangle of abstract forms that loom over the figure includes both biomorphic and gestural elements.

How are we supposed to take these collisions? Are the shapes and marks meant to be read as visual correlatives of the depicted narratives, emanations of the figures’ inner states? Possibly, but Humphrey is too restless (and inventive) a painter to fall into formula. Although abstract elements are present in every painting, their relationship to the figures is in constant flux. They can intertwine, or be absolutely separate, as in a boldly disjunctive canvas titled Kicking Back. The upper half of the painting is filled with a turbulent, mud-brown gesture that looks like it might have been made with a mop or a broom. Below is a pair of legs and feet that appear to belong to a woman relaxing on a beach. There is a marvelous gratuitousness to the brown gesture, which nonetheless may conceal (even from the painter?) some occluded meaning, like the anamorphic skull in Holbein’s Ambassadors.

The most explicitly narrative—and perhaps most memorable—painting in the exhibition is At the Door. It shows a barefoot woman in a summer dress listening at a closed door. Light from the room behind spills out the bottom and sides of the door, while a colorful array of abstract shapes (diaphanous blobs, enamel-like dots and strokes) swirls around her head. The Rothko-like brown and gray geometry of the door and wall contrast with the pretty dress and the candy-colored forms near the woman’s head. Like many of Humphrey’s pictures, At the Door (like another of this show’s standouts, Cement Truck) might be an allegory about the art of painting, but it also conveys a rich, almost novelistic sense of story. Lately, Humphrey seems to be moving away from the cartoony distor- tions that typified his work in favor of a relatively straightforward style of figuration and more unified subjects. It’s as if the abstract elements have siphoned off and transformed Humphrey’s cartoony impulses. The results suggest exciting new possibilities for an artist whose iconographic daring and exquisite painterly skills have been too often overlooked.