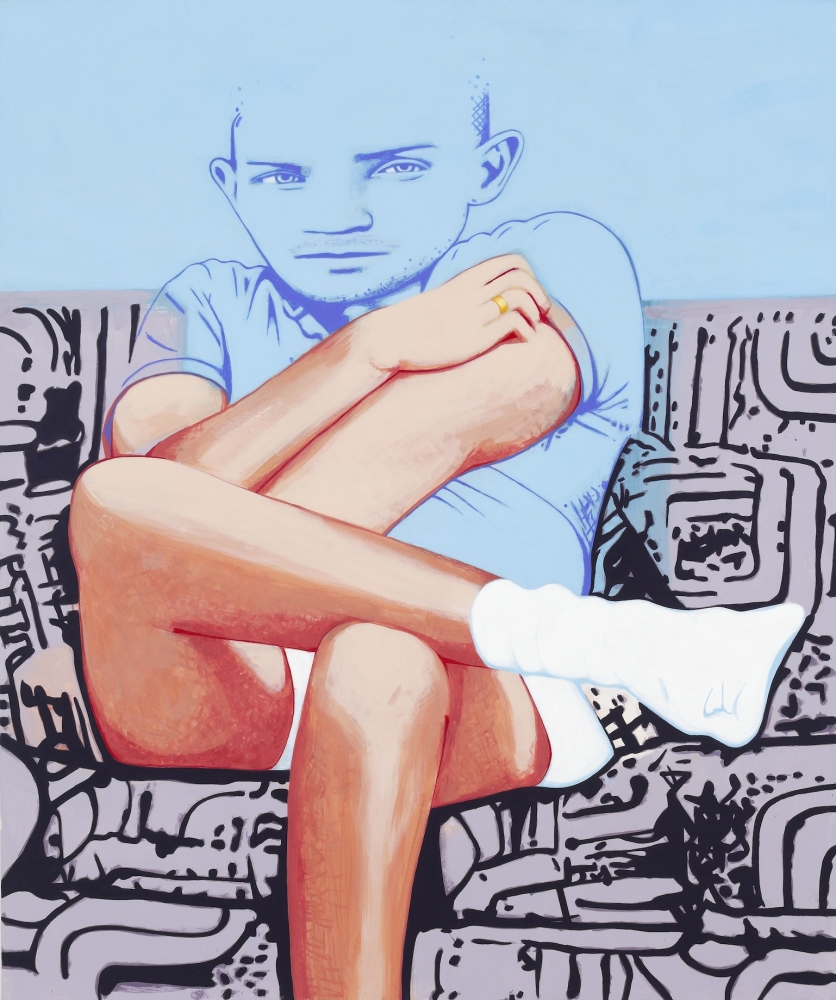 Over the past three decades David Humphrey has shown an admirable tendency to grow bored with his studio practice; this can be a blessing and a curse. At the very least it results in a regular rexamination of his creative life.

In the 1980's, Humphrey achieved early recognition for a series of biomorphic, surrealist narratives whose formal inventiveness was at times overshadowed by a Tanguy and Baziotes-like familiarity. Their ties to surrealist precedents thankfully kept them out of the neoexpressionist firmament of the time and established Humphrey as an artist to watch.

The 1990s saw Humphrey delve more deeply into his own family psychodrama by superimposing the flotsam and jetsam of popular culture onto reproductions of family photos. These pieces created disturbing frissons that spoke vividly about barely repressed desires and the need break from convention; cartoons could become though bubbles, abstract gestures could imply emotional violence. They were some of the best paintings being done in the United States and were underappreciated at the time. And while his works owed a debt to Polke and Salle, Humphrey was always more interested in creating new meaning rather than disassembling existing signs.

In his current show, "Work and Play" Humphrey keeps all of these paradigmatic balls in the air while continuing his -- at times -- scathing self-examination. As in his earlier work, absurdly cloying Hummel statuette sentiment gives Humphrey the critical distance to sniff around the origins of that sentiment. In Horsey Love a pink polka dot colt is stuck in a scatological puddle of mud. It nuzzles a faceless, yellow parental horse casting a warm glow on its cheek. This painting couldn't be more rediculous and yet there is real fear, tenderness and anxiety under the layer of dripping reacle.

On the Couch sees a glowering teenage male seated on a couch (presumably therapeutic) made of what appears to be Philip Guston drawings. He is itching with contempt; his forehead lopped off suggesting thoughtless rage. He looks like he just stepped off a tennis court for the strictly enforced weekly therapy session where he has never uttered a word. The Guston reference is a telling one as Humphrey has a piece of Guston's in his own collection and may identify with the artist's unbottled anger. But whereas Guston's rage ended in a cathartic, nightly booze and cigarette binge, the familiar dots and dashes of his drawing style has, in this case, been tamed into a textile for a pullout couch leaving the depicted young man with no real release.

Paddock offers a half-naked woman from behind looking down on a paddock of toy horses. The scale of the figure to the roys suggests Frank Moore's AIDS elegies with their American Bison grazing across absented hospital beds. However, the woman appears disengaged as if her own crisis doesn't measure up to Moore's Or perhaps the corralled horses are as domesticated and limited as her own longing. What the woman is left with is a kind of bored disapointment, a gulf that in this case is filled with strident swirls of nearly distracting paint. Her predicament would be just another moment of weltschmerz if she wasn't also bathed in a cool spolight suggesting that her stage is, at least in her own mind, a bigger one.

In all of humphrey's work color plays a key role. Somewhere between the pastels of an Easter egg hunt and the hallucinatory snap of a Looney Tunes animation, the palette lures you into the origins of the imagery and then pulls a visual bait-and-switch like the "meep-meep" right before Wile E. Coyote plummets to the canyon floor. A simple pink can have an acid edge to it, a cerulean blue that shows up in many of the paintings appears a bit frosty on closer inspection, all of which encourage a reappraisal of his entire operation.

The weaker pieces in the show are either underdeveloped, asking the viewer to come along on a ride that is only half finished, or are the result of a process that is hit or miss by nature. This is the collagist's conundrum: maybe two out of five pieces are amazing and the rest less so. Humphrey throws a lot of stuff around. When the paintingswork they are disarming, evocative and elegiac. The co-mingling of high and low, the beautiful and abject all call for one another. When they don't, they are just stuff. The three sculptures in the show hint at future meaning but never quite arrive. Humphrey's natural gifts as a painter and his willingness to ry just about anything are all contained within the proscription of painting. The open-ended nature of sculpture (from the ready-made on) seams to prevent the artist from finding the connective tissue between image and emotion, maker and viewer, thing and meaning. What would be transformative in paitning frequently remains stuff in the sculpture.

In his best work Humphrey makes completely unexpected links between what he says and how he says it. The sweep of a loaded brush connotes at the end of a relationship; reticulated paint stands in for hormonal, teenage lust; stain paintings implies ennui. Inside of its closed set, painting with its endless arsenal of articulation leaves an artist like Humphrey with a limitless field of play. With all of these options open to him one walks away from "Work and Play" knowing that the artist's best days are ahead of him and that is a remarkable thing to say after 30 years.