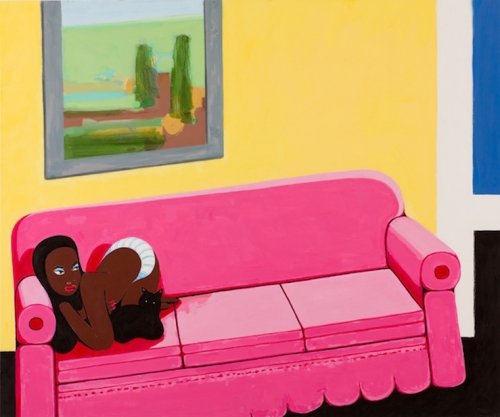 One way to get to know a person very well - without talking with them - is to draw with them. I got to know David Humphrey in this way when we became part of the same figure-drawing group and I quickly noticed something unique about his approach. While some of the group's participants exude a masterly bravura and others just sit hunched over intensely scratching away, Humphrey leans back in his chair with one leg draped over the other, sitting close to the model but off to one side, his hand making relaxed, wandering motions over his page. At the end of the sessions, we are always curious and delighted to see his playful and witty results. His secret to making finished works of art, rather than studies or sketches, is that he starts with a semi-sheer sheet of Mylar that he has prepared with an abstract painting on its backside, and then he draws the model with markers or colored pencil on the front. He says he feels like he is having an artistic collaboration with himself, improvising between the abstract painting and the model. His thoughtful yet effortless approach made me want to know more about his process, so last year I visited him in his Chelsea studio to make the video below. Recently, I dropped by again to see what he's working on for his upcoming show. Here's a sneak peek.

Pink Couch: The happy domestic family unit of the woman and the cat create a weight or ballast on the left side of the sofa, causing it to tip up in defiance of gravity. In the slightly Disney-fied modern-art reduced interior, the landscape window is the most gestural and alive part, raising the question of the reality of everything else. The black cat stares directly at us, fixing us in space. Meanwhile, the topless woman looks to the right with a wary expression, covering her breast as though she's been interrupted. Who is she looking at? Given the ambiguity of her intimate posture with the cat, it becomes a loaded question. Our imagination of this possible intruder to the right has a psychic weight that perfectly balances the visual weight of all the pictorial elements sliding to the left.

Cement Truck: The accident of the fallen industrial machine is an enigma to a man in a space helmet. He's looking at the wheel, missing both the meaning of the catastrophe and the contents of the truck leaking onto the road. It's not cement, but a psychedelic enigma from the interior of the machine. These hallucinatory dreams or thought bubbles of consciousness make a kind of painting on the road. "The spaceman represents the role of the artist who encounters something in the world and sees it as though he didn't understand it, and in the process of trying to put it into context creates a new way of looking," says Humphrey. "I was thinking of Dave in the film 2001: A Space Odyssey when he is addressing Hal, the computer. He's a little bit like that. I put a helmet on him to make a cartoon about consciousness as this floating mental space, which I think is something worth addressing in painting. In figurative painting, you're making an analogue of the perceptual world."

Ass Pups: This is like album cover art for a rock band, where the lead singer has a narcissistic pathos in the center of the photograph while the other members posture with sly and wicked humor as a counterpoint.

Humphrey's work is like a puzzle with hundreds of easily identifiable pieces that don't add up to what you'd expect. The paintings are extremely enjoyable to contemplate -- there's never a lousy mark or a raised voice and you're lulled into a such feeling of safety even a pornographic detail won't ruffle you -- but you can never get a sure footing. Says Humphrey, "I try to make paintings that look very conventional, which fail to be normal, but you can't tell why. And maybe their conventionality is trembling at the edge of breaking down or swerving in some unexpected direction. I like inhabiting that position within a theater of roles."