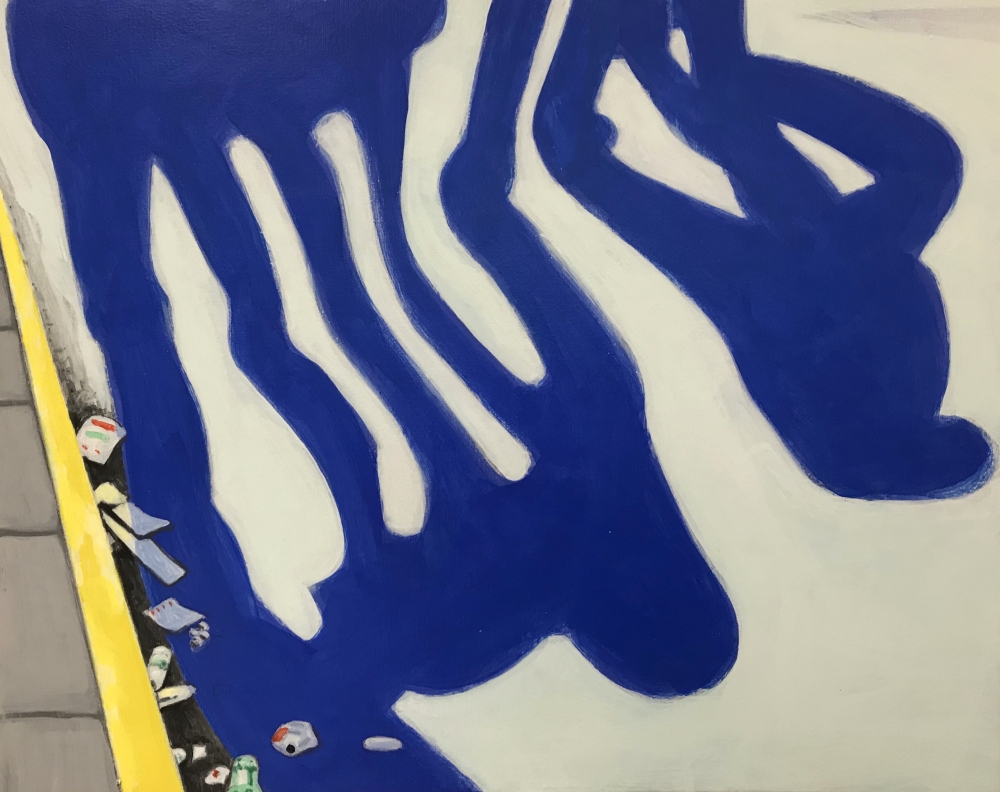 In the 1940s, Philip Guston noted that the problem with figurative art was that it “vanishes into recognition.” By 1960, he was griping about the conceit that abstract art was “autonomous, pure and for itself.” The tension implied by these two conflicting but evidently valid observations yielded the gnawingly familiar yet otherworldly paintings that immortalized him as a visual chronicler of twentieth-century discord. In a revelatory two-person exhibition at the New York Studio School, David Humphrey and Medrie MacPhee, both technical virtuosos, offer works on paper that acknowledge and to an extent resolve Guston’s quandary, but from divergent starting points.

Humphrey is an unabashedly figurative artist, clearly depicting real circumstances and lodging his viewpoint. But his sensitivity to the very limitations of the figure and of visual narrative impels him to paint with succinct wit. In Breakfast, for example, an egg-shaped being sits down to a morning meal, seemingly reduced in that packet of time to a customized repository of what it ingests. Similarly, in other, often less benign or whimsical iterations of existence as he sees it, he casts human life as sharply compartmentalized: cops are functionally approximated to threats (Caught, Shadows of the Law, Struggle), the displaced to beseechers (Refugees). Any notion that art should operate as externally unmediated expression would be foreign to an artist like Humphrey. But his knowingly subjective provocations and courtship of disagreement reflect his insistence on engaging in what Davy Lauterbach has called, in Fredericks & Freiser’s new book on Humphrey’s work, “picture making as a way of expressing the intricacies of being alive.”

MacPhee is a decidedly abstract artist, but her suggestive titles – which seem integral to the work – dash any suspected conception on her part that visual presentation can be truly non-referential. At the same time, it would be a stretch to call her work figurative, even if it at times it converges on it. In A Promise, a large, upright entity emits something apparently verbal towards another small, wilting thing, imparting a sense of placation from the strong to the aggrieved weak. Disagreement, Message, and Pause incorporate pictorially comparable dynamics, whereas Moving On employs more ambiguous signals of insouciance (a cigarette?) and escape (an oar?) in a cryptically anthropomorphic framework. Although topical linkages are inessential to appreciating MacPhee’s work, it is anchored in relatable visual symbols that viewers can apply – and which she effectively invites them to apply – to the world they apprehend.

Considered in isolation, MacPhee and Humphrey’s work might not intuitively seem connected. But curator Karen Wilkin gently elicits their kindredness, illuminating rich complementarity by way of rows in which larger works of the artists alternate. What MacPhee hints at Humphrey might appear to specify, clarify, or resolve. Dystopia having informed her work in the past, one pair of juxtaposed paintings intimates that her trek Up the Hill might sadly lead to his Riot Cop. In a less ominous tandem, her enigmatic Soft Landing segues into his relatively untroubled Landscape. While the two artists operate at different distances from the real world, it appears central to the potency of MacPhee’s as well as Humphrey’s work that its distinct relevance to that world be clearly recognized.

MacPhee’s simultaneous solo painting show at Tibor de Nagy – aptly titled “Words Fail Me,” a logical mantra for most visual artists – affords insight into the works on paper shown alongside Humphrey’s. In four large canvases, MacPhee combines fabric strategically cut from contemporary discount clothing with oil paint, immediately simulating the way garments fall and shift on a body in motion with the broader effect of recapitulating physical and social context. Take Me to the River employs different textures of fabric and quasi-topographical line to evoke movement in general and pastoral refuge in particular. The archly risqué A New Shape in Town, which presents a pink oblong shape impinging on a dark blue central cavity, has a jocular cast but, especially given the proximity of clothes to anatomy, is difficult to divorce from sex, and, beyond that, sexual predation. The brightly colored, appealingly symmetrical Favela, named after the infamously neglected and dangerous Brazilian shantytowns, scans as a work of meticulous, targeted irony. As self-contained and removed as MacPhee’s work may appear, its subtext isn’t far from the often-cruel world that Humphrey confronts.