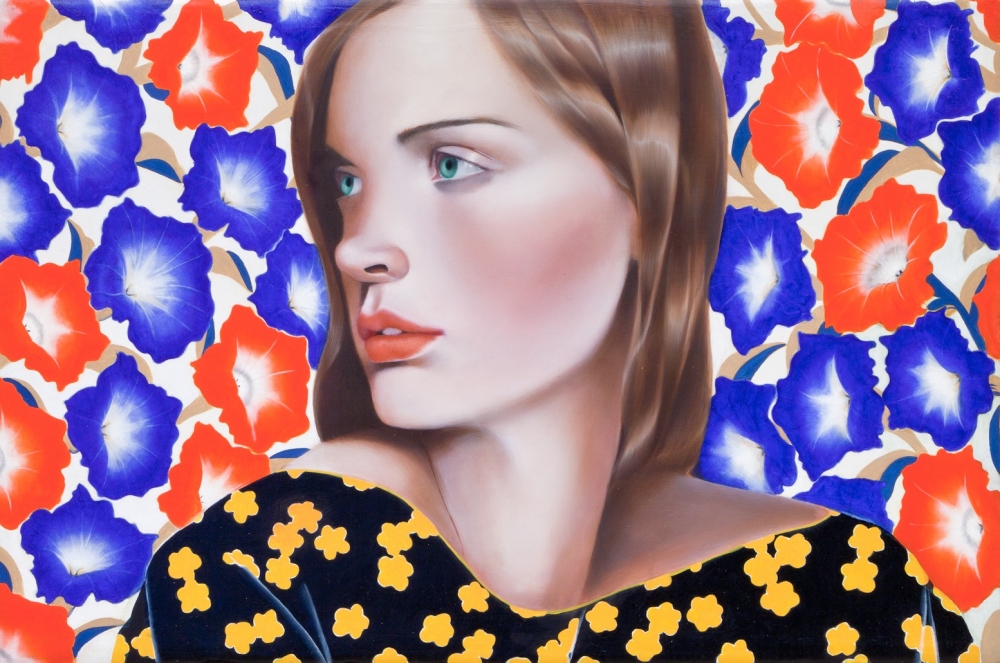 Everything this year feels well behaved and in its place, if still a little bit like, well, walking in circles, aesthetically and literally. But, again, it's an art fair, what are you going to do? I went in looking for trends within the “Contemporary" section on Pier 94, but found none; it's like trying to find trends in one of those ball pools that kids play in, only the balls are very, very expensive artworks and the kids are well-heeled adults, ambling along, taking champagne selfies.

Some colors of ball are missing from this pit though. Among the anti-trends that I spot this year in the Contemporary section (with generous exceptions, of course): There is less of the kind of neon- and text-based works that give a lot of art fairs the look of a stridently ironic drug store; fewer cartoons and logos; fewer mirrors and gadgetry; less explicit sexuality overall.

Whether these observations represent changing currents in art, or just the Armory's tightened focus, I don't know. It is also mainly lacking in flashy projects by brand-name stars. For my money (which is none), this is mainly a good thing, since as a viewer you can then focus on discoveries and rediscoveries, the main positive activities of a fair's shake-the-market-and-see-what-comes-out kind of art experience.

So, here are a few of those: At Delhi's Gallery Espace, a wall full of works by Zarina Hashmi, an India-born, New York–based artist in her 80s. If small works featuring abstract fragments of gold leaf sound like bling-art to you, I assure you these radiate a focus and measure that immediately read as the product of a lifetime of exploration and research.

Flipping these virtues on their head is the “mail painting" by the German conceptualist Karin Sander (b. 1957) at Reykjavik's i8 gallery. Monochrome meets mail art, it consists of a tondo-style blank canvas that Sander sent in the mail, so that the thing displayed on the wall is a blank canvas plus the scuffs of its travel and postage labels that it took to get it to its artistic destination. Here, it grabbed me immediately, I think just because it reads as authentically funny.

At Houston's Sicardi Gallery, the New York–based Uruguayan artist Marco Maggi (b. 1957) is a madman for etching on things: a convex mirror, a triangular hunk of crystal, a piece of cheap tin. These earthly objects become alien artifacts, scored with intricate but wordless maps or circuit patterns.

Also arresting, from the Armory's focused selection of artists from the Middle East, North Africa, and the Mediterranean: the photo suite by Iranian artist Setareh Shahbazi (b. 1978) at Cairo's Gypsum gallery. Semi-abstract, full of tingly colors and half-digested images, these works are like x-rays of a brain on fire.

There are some nice paintings: Elizabeth Glaessner's warped sci-fi expressionism at PPOW, on one end of the spectrum, and Jocelyn Hobbie's serenely stylish profile portrait at Fredericks & Freiser, on the other. At the booth of Skopia / P-H Jaccaud, you are surrounded on all sides by the expansive, dream-like red-and-blue serenity of Germany-based Swiss painter Thomas Huber's canvasses, depicting spaces that evoke Giorgio de Chirico on an interior decorating kick.

Channeling a connected vibe of architectural strangeness is a pair of great videos, Diver and Tanker, by the London-based French artist Noémie Goudal (b. 1984) at the booth of London's “itinerant project space" Edel Assanti. In one, a static long shot of a diving tower in the middle of a lake, figures emerge from the water, climb to the top, and throw themselves into the water, then climb and hurl themselves again, in an endless, mysterious loop.

Finally, the standout at the 2015 Armory Show is so obvious it is painful, righteously so: “Frameworks of Absence" by US artist Brandon Ballengée (b. 1974), a dummy museum installation occupying Ronald Feldman Fine Arts, a year in the planning. A triple threat, as a biologist, environmental activist, and visual artist, Ballengée's ambitious project consists of framed natural history illustrations and art etchings of various species that have gone extinct. Each of the pages is specific to the period when the species in question died out. Ballengée has defaced this archival material, leaving a hole where the species's image should be, an act of artistic vandalism that makes a point with surgical economy.

“We stand guard over works of art, but species representing the work of aeons are stolen from under our noses," reads an epigram from the American conservationist Aldo Leopold at the entrance to the booth. The level-headed importunity of Ballengée's exhibition-essay on serious ecological issues makes any reflections on contemporary art's shifting ecology that I might have feel trite—as they are. I do hope that his mock museum is snapped up by a real museum, which is where it should be shown.

Read other articles by national art critic Ben Davis: Ladies and Gentlemen, the Björk Show at MoMA Is Bad, Really Bad, What's Really Going on at Abu Dhabi's Saadiyat Island? and Why I Believe New York's Art Scene Is Doomed. Meet Ben Davis in person at a VOLTA NY salon (organized in partnership with GalleryLog) on Sunday, March 8, at 1 PM on Pier 90. Follow artnet News on Facebook and @benadavis on Twitter.