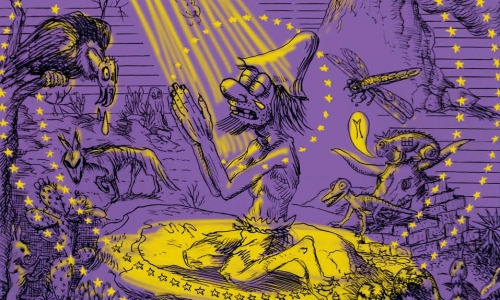 There’s a moment of horror on entering cartoonist Gary Panter’s studio, when I realise I’ve stepped on one of his canvases – a quite wonderful painting of a robot fighting a dinosaur.

“Don’t worry,” Panter reassures me, “it’s a doormat.” He’s not joking. It turns out the orange throw over the couch is a painted canvas too. In fact, Panter’s Brooklyn studio – which is also his apartment – is littered with all kinds of art: bulbous, home-made candy-coloured candles from a planned installation, bowls of beads and Godzilla toys, and of course his own complex, colourful, beautiful paintings.

Among the artworks are the 32 boards for his graphic novel, Songy of Paradise, which Fantagraphics will publish in July this month as a huge, purple book with gold leaf on the cover – a humorous counterpoint to Panter’s grimy linework.

Panter is a lanky guy with long white hair and a quiet voice, retaining just a little of his Texas accent after many years in New York. He drops his g’s and tells tales of a career that has included stints as a janitor and – just like the titular hero of Songy – a fence post digger.

A cartoonist’s cartoonist, Panter can count Simpsons creatorMatt Groening and Maus artist Art Spiegelman among his fans. But it took him a while to find his audience. When his comic book Jimbo was published by a money-losing imprint at Groening’s Bongo comic (one made especially for him and another artist, Mary Fleener) it didn’t exactly fly off the shelves.

“Jimbo was very unpopular,” laughs its creator now. “There’s one issue that they only made 500 of. I don’t even know how you do that with offset printing. You just turn [the printing press] on and turn it off.”

Before cartoons, Panter had found success designing the set, properties and puppets for Pee-Wee Herman’s TV program, Pee-Wee’s Playhouse. He won three Emmys for his work. “My tombstone’s gonna say ‘designed kids’ show’,” Panter sighs. “It was a fun show, it was a wish I’d had since childhood to design a show, but showbusiness is a really intense grinder, and it burnt me out real well.”

Luckily, something else was brewing. The final issue of Jimbo – #7 – chronicles Jimbo’s descent into Hell, represented on the page as an abandoned mall. The comic is a scant 33 pages long, but Fantagraphics decided to make a big deal of it: they repackaged Jimbo #7 as Jimbo’s Inferno, a gigantic, 11x15 hardcover book, and followed it with Jimbo in Purgatory.

The wider reading public began to notice what Panter was doing: each page corresponded to a canto in Dante’s classic poems. Though the improvisational-looking drawings were of robots or monsters or yokels on tractors, they were all part of a highly complex representational scheme that paid homage to, and made fun of, Dante all at once.

The last volume in the trilogy ships this month: Songy of Paradise merges Dante’s Paradiso with Milton’s Paradise Regained, and tells the story of Jesus’s temptation in the desert, with a gap-toothed hillbilly named Songy taking the place of Jesus (Panter: “I didn’t want to deal with Jesus”).

Panter, who spent a year-long fellowship at the New York Public Library studying Milton in preparation, has put a lot of himself into it as well. He describes himself as “Christian-damaged” but admits that religion does obsess him.

In fact, Panter says that he experienced his own formative vision, in a manner of speaking. Back in 1972, he “took a shitload of bad acid”, an experience that disturbed him so badly he had to leave school for a year. The memory of it still haunts him: “There’d be composite creatures made of vacuum cleaners, all kinds of devices,” he says of his trip. “And then they’d be covered with thousands of roach clips each holding a butterfly wing or a playing card, and they’d all be stop-motion animated, and going, ‘Come with us!’” This was not the organic and spiritual experience he’d hoped for.

Panter’s father, Mel, who died last year, was a painter as well. He and his son never agreed on matters of faith, and the younger Panter’s work was disturbing to his conservative and devout father. The elder Panter tried to get his son to snap out of it by sorting out a job for him at the local funeral home. Sometimes, the job required Panter to join injured people on the ambulance ride to hospital, just in case the worst happened. “In these little towns, the ambulance is also the -funeral home,” he explains. “If there was a car wreck, we’d have an 80-mile drive to Dallas while people bled to death.”

Panter is a gentle soul, and this frustrated his father too. “My father said to me, a year or two before he died: ‘You know, Gary, you shouldn’t be so nice, because you might lead a lot of people away from Jesus,’” Panter recalls sadly.

The bitter irony is that Panter’s work is anything but discouraging of religious devotion: his trilogy of graphic novels completed by Songy are symbolically complex and rigorous examples of religious art, rigorously following the structure of his source material. “I’m doing word or line counts and dividing by the number of pages so that the same thing is happening in my books that happens in Dante and Milton,” he explains.

Ultimately, Panter’s redneck hero wins because he’s stubborn: “The devil himself appeared to me, bold, scaled and loathsome and trying to beguile me!” he tells his family. And, like Panter recovering from his bad trip, Songy survives.

Remembering the experience of coming back from the year of depression that followed the acid disaster gives Panter strength. “In a way [coming down] reinvests you in this reality,” he says, “which is a very interesting place.”