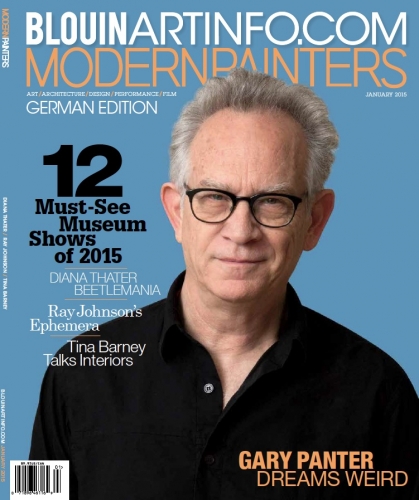 Gary Panter’s show of new paintings at Fredericks & Freiser is called “Dream Town” — a title that could refer both to the array of surrealistically weird scenes depicted in the works, or to his own home studio, located in an unexpectedly idyllic, quasi-suburban corner of Ditmas Park, Brooklyn. It’s there that Panter — whose resume includes everything from underground comics like “Jimbo” to a set designer role on “Pee-wee’s Playhouse” — keeps an attic studio, chockablock with rolled canvases, toys, small sculptures-in-progress, and innumerable other artifacts. When I visited earlier this summer he was just about to ship out the “Dream Town” paintings, many of which appropriate imagery from schlocky movies, repurposing buff men, heroic women, and the occasional dinosaur atop washes of abstract gesture or vivid blocks of solid pastel colors. (“Sometimes I think I’m trying to be a British Pop artist,” Panter said.)

While the artist is loathe to impart a narrative through his paintings — “vague” is an adjective that he uses often, to positive effect, along with “goofy” and “loony” — he admitted that there is a certain maritime theme flowing through the new works. One painting features figures marooned in the ocean, grasping at an upturned rowboat. Another depicts a few men, sporting ’70s porn-worthy moustaches and peacocking in front of a ship. “Pigboat” shows two submarine commanders inspecting a deceptively realistic-looking periscope-like device: “Technically a sub guy would not be impressed,” Panter said. “But people who like shapes might like it.” The artist culls his imagery from movie lobby cards, less concerned with the action depicted than with the compositions. “I don’t want the subject matter to get in front of the goofy formal things I’m doing.” Panter’s style is decidedly at home within Fredericks & Freiser’s stable: Indebted to stalwarts like John Wesley, and obviously influential to a younger generation of artists, such as Keegan McHargue. Other people Panter loves: Karl Wirsum (“one of the best painters of the 20th century in my peculiar rating system”) and Ed Ruscha (“he really said something about the Western landscape with the format of his paintings”). One artist Panter hates, unexpectedly: Anselm Keifer.

In addition to painting, Panter has been keeping busy with comics — he used a recent 10-month residency at the New York Public Library to start an adaptation of Milton’s “Paradise Regained.” He’s in a psych-rock band, Devin Gary & Ross, for which he plays guitar and sings. And he’s gearing up for a series of concerts alongside Joshua White, an icon of the 1960s light-show generation whom Panter met via his own series of lo-fi, DIY light shows that he was putting on in alternative spaces and galleries in Williamsburg, Brooklyn in the late ’90s. (They’ll be providing live visuals for bands including Television and the Bad Plus at the Skirball Center for the Performing Arts in New York October 23-25.)

In keeping with that Summer of Love vibe, Panter is brainstorming a larger installation conceived around the idea of the hippy — a cultural figure that, as a boy growing up in a tiny Texas town in a very Christian family, he first experienced through magazines. So far the hippy elements include beaded necklaces, some of which are in a vitrine at Fredericks & Freiser, spelling out sets of words (Frank Zappa album titles, for instance). Panter has also been buying Indian woodblocks in order to make his own hippy-inflected fabrics, “a misuse — my own shitty version of Indian prints.” But all of these small pieces are just possible notes in a more comprehensive installation, one that he partially likens to Freeman, Lowe, and Singh’s immersive “Hello Meth Lab In The Sun.” He’s applying for grants. “The problem with hippies is they’re such a horrible cliché, and nostalgic,” he said. “It’s very dangerous territory to goof around in.” Other touchstones he’s thinking about: Navajo roadside stands; the charmingly ramshackle living rooms of hippies he has known; the signage of discount gas stations. “In a sketchbook one should train oneself to think big,” counseled Panter, flipping through several volumes of doodles, drawings, notes, and lists. “Like: We’ll hollow out a boulder and put a head shop in it! Lunatic stuff.”