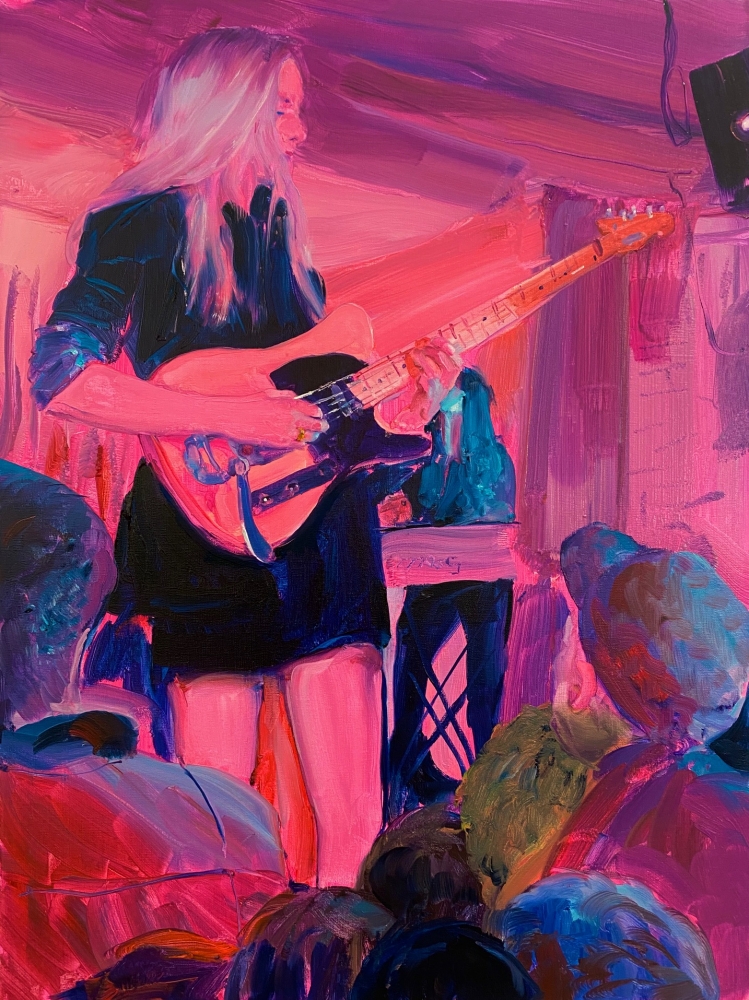 Langberg himself has sat for the painter Jenna Gribbon, who is currently working on her next exhibition, due to open in London at Sim Smith in the spring. (She also recently had solo shows with GNYP Gallery and The Journal Gallery, as well as group shows with Miles McEnery Gallery and Taymour Grahne Projects.) A large part of her portrait work, too, has been focused on the people closest to her, especially her partner who features in paintings regularly. “I’m interested in what it means to see and be seen in a time where there is more imagery of both than ever before,” Gribbon said. “Desire isn’t the only aspect of looking that I deal with, but it does factor in frequently when I paint my partner.”
Gribbon’s partner is comfortable being her muse—she’s a professional performer and musician—but in painting her, Gribbon also turns her into an object for others to look at. “One of the things that interests me is the contrast between the big, zoomed out experience of an audience seeing and interacting with her, and a kind of myopic focus in our intimate moments,” she said.

This intense, intimate lover’s gaze is an important tactic for Gribbon “to jar people out of what they think they already know about consuming images of naked women, hence the fluorescent nipples,” she said. “If you can get someone into a position of self-consciousness, it’s a fruitful starting place.”
One of Gribbon’s recent oil paintings, Objectified in Boxers (2020), features her partner, hair loose, hands in pockets, eyes cast down and smiling, wearing nothing but a pair of boxer shorts. “You can’t completely avoid objectification when depicting a naked body, so I think it’s best to acknowledge that and move on,” Gribbon explained. “Treating objectification as some kind of deal-breaker negates the actual complexity of the subject and blocks some really interesting paths of exploration. One of those paths is the depiction of desire for a woman’s body from the perspective of another woman. It’s something we’ve still seen very little of culturally. Narratives in this realm that we do encounter are usually of the manufactured pornographic variety, or that of ‘they were basically just really good friends who were affectionate.’”

Gribbon added, “These preferred modes of depiction are so ingrained that it can be hard to make something that deals in a woman’s desire for a woman that doesn’t get viewed through one of those two lenses.”
Gribbon’s resolve as a painter has been to acknowledge that specificity of experience, the desire she feels in her own relationship, and to make the viewer aware of her own complicity and involvement in looking: whether it’s through perspective or by introducing her own body into the work, too. “That said, I have also thought about about queer eroticism depicted by male artists and been jealous at times,” she said. “I wondered, ‘Why can’t we have that? Where are our
Marsden Hartley
beefcakes?’”