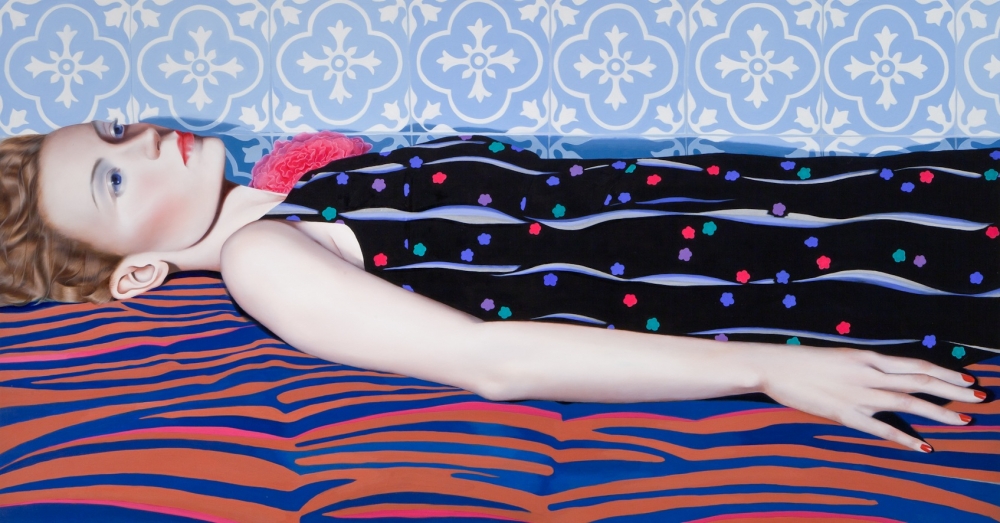 Jocelyn Hobbie’s variations on boredom could make a viewer lie awake at night. Her painted depictions of women frozen in their tedium offer no reference for this absence of joie de vivre, and each flawless beauty appears slightly displaced among her eclectic, patterned wallpaper and vibrant linens, her perfectly made-up face, her icy gaze. This gaze never seeks contact outside of the canvas and it is always vacant. It makes one insane, attempting to rationalize the origin of each woman’s ennui.

Hobbie’s technical prowess in the fourteen oil paintings on display mesmerizes. Her ability to combine scintillating, clashing designs—draping them together into backgrounds, pillows, and skirts—is enviable, and aids in shielding these elegantly aloof figures against our desire to better know them. The artist crystallizes the kind of dissatisfaction that tends to linger and then lift during mundane routines . . . like, perhaps, living. Her beautiful girls reveal a contemporary condition that is felt all too often, a twenty-first-century limbo that no amount of overstimulation could break. (Never has a dense, sweet slice of something that looks like cinnamon raisin bread, tenderly held by a freckled Lolita in a stripy boat-neck top and gingham tie [Untitled, 2014], appeared so simultaneously delicious and dull.)

Stare at the canvases long enough and it’s easy to imagine the scaffolding of supersaturated ornamentation that keeps them together utterly falling apart. Stream, 2015, calls to mind John Everett Millais’s Ophelia, 1851–52, where Millais’s tragic heroine floats vacantly, helplessly down a stream. Hobbie’s paralyzed sylph, despite her seeming emptiness, or perhaps because of it, makes one want to curl up near her limp arms and grow mad together.