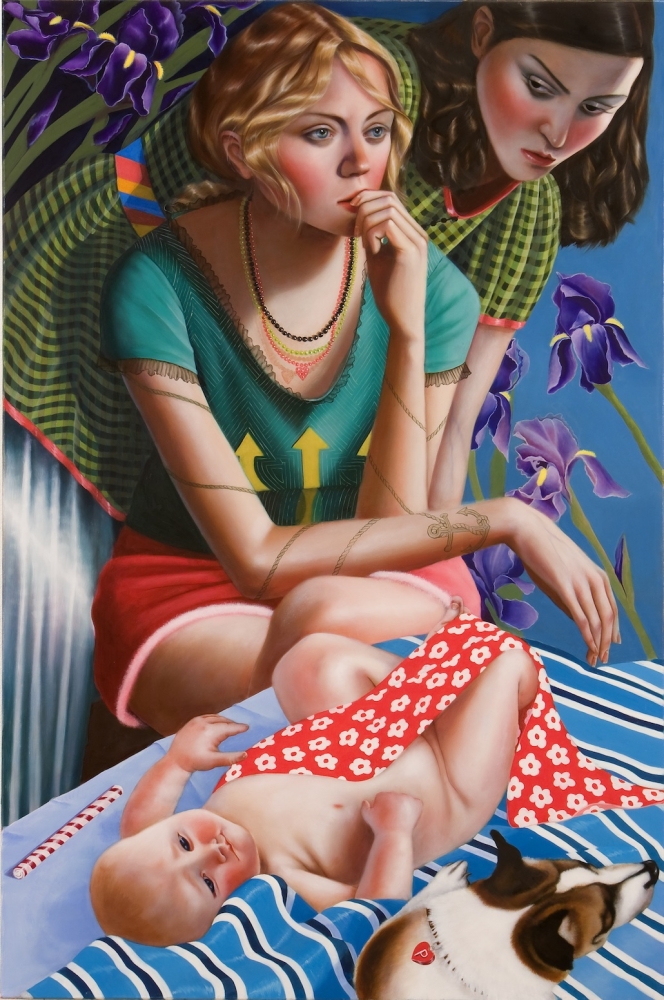 Longtime New York art lovers have been exposed to the “New Objectivity” (“Neue Sachlichkeit”) movement in German art (between World Wars I and II) through past museum shows like “Glitter and Doom” at the Met (2006) and “Otto Dix” at Die Neue Gallerie (2010). The point of “New Objectivity,” to these Weimar Republic artists, was to strip the social world, and especially the person being portrayed, of any pretense and to represent something more raw and true than what was being presented by other movements of that time (especially expressionism). In Dix’s work, for instance, a greedy banker looked like a greedy banker. Corrupt politicians, religious hucksters and fat-cat industrialist war-mongers looked like the duplicitous and shady creatures they actually were.

Passing through Fredericks and Freiser’s latest show of female portraits by Jocelyn Hobbie, one can definitely see the influence of this movement. The New Objectivity artist who seemed to be most relevant is Christian Schad, who focused more on personal subjects than dominant culture social archetypes. However, there is one huge difference between the work of Schad or other New Objectivity painters and Hobbie’s current work. For the New Objectivity artist, the subject of the painting primarily looks directly out at the viewer. There is an attempt at engagement between the sitter and the viewer, as if the painter wishes to establish a common humanity. In this latest show by Hobbie, all of her women are decidedly introspective, looking inward, not even aware of the viewer, nor even concerned whether there might be a viewer.

This has an amazing effect. By altering the subject’s gaze away from the viewer, and into the subject herself, the viewer becomes more of a judge/voyeur. The artist is, in fact, almost inviting some type of admiration for the physical beauty of the subject along with a judgment about the life-style of the person being represented. In many of Hobbie’s pieces we see very young, attractive women surrounded by and garbed in the trappings of a contemporary consumer culture. They are literally in their own little hedonistic worlds engaged in some type of deeper contemplation. But what are they contemplating? Are they thinking about dumping their boyfriends? Are they questioning the social trends of how they are expected to be ultra-feminine and brand conscious? Are they thinking about the satisfaction/dissatisfaction or fullness/emptiness of their lives? Are they thinking about anything?

The piece pictured above is called “Infant.” We see Hobbie’s typically introspective girl but the painting is also filled with ambiguity and possibilities for interpretation. Indeed, the work is rich with symbolism and potential meaning. The central woman wears a trident on her tee shirt and bears an anchor tattoo. The trident was a symbol throughout ancient religions (especially associated with the ancient Greek god of the sea) and, due to the three points it possessed, it seemed to represent ‘mortality’ (Becoming, Being, Death). The anchor was (as well as being associated with the sea) an early Christian symbol that secretly revealed the crucifix. The crucifix, of course, secretly revealed the ancient symbol or ideogram for a tree. A tree is, basically, a bridge between the earth and God. We also see that the genitals of the baby are discreetly hidden so that we do not know whether this is a male or female child. We see a dark haired woman staring critically at the blond woman. The flowers might represent a life in full bloom, but why is the dog lying next to the child and why does the dog have the letter “P” on its chain? The letter P, by the way, was called “Chi” in the ancient Greek language and was half of the ‘christogram’ Chi Rho (PX) – a way early Christians represented Jesus Christ. Could this be a clue in interpreting this painting?

Although apparently inspired by the work of artists from a different period of time and social context, Hobbie's work is highly relevant as a contemporary statement on the lives of young women in America and how they are adjusting to or questioning the demands placed upon them.