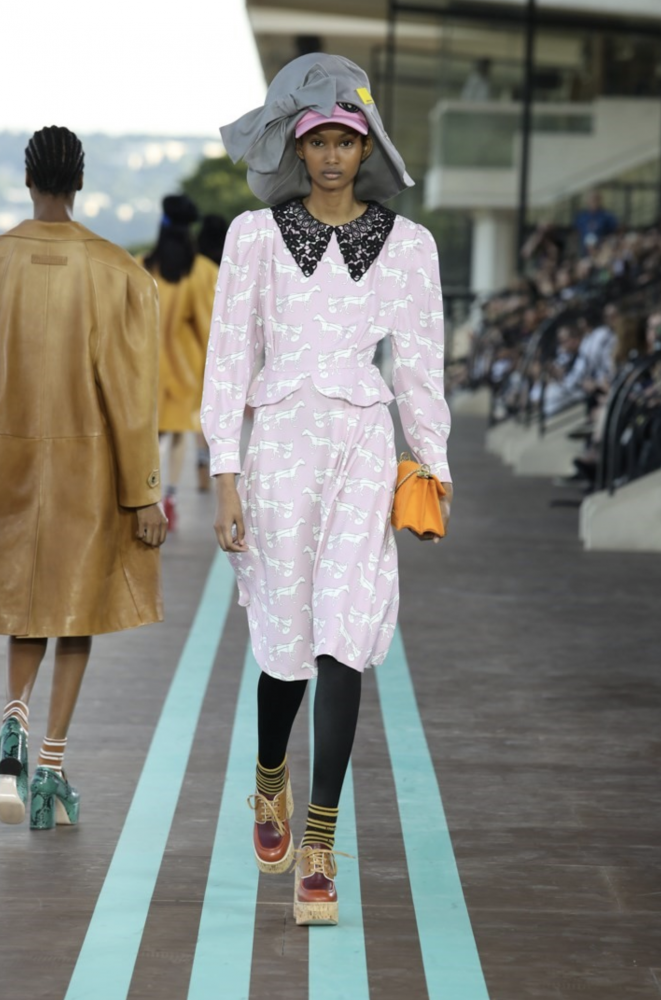 The Hippodrome d’Auteuil, the horse-racing arena in the leafy Bois de Boulogne on the outskirts of Paris, has been in operation since 1873. Even a fashion show couldn’t stop it – when Miu Miu staged their Cruise 2020 show on the stands above the course this Saturday, it was preceded by a hurdle-race of jockeys dressed in quite Miu Miu shades of clashing purples, oranges and greens. Coincidence, that.

Miu Miu call their cruise collections ‘Clubs’ – the last was a jzushy affair held in the Belle Epoque lobby of the Hôtel Regina, by the Tuileries. This one was a ‘Jockey’ club, obviously, and the models resembled not the racers but the racegoers, parading along an imaginary observation deck that looked like a permanent fixture but had actually been engineered by Rem Koolhaas’ AMO to integrate perfectly into the existing architecture of the Hippodrome. And, in the same way, the fashion fitted too – not least because the horse races were (and sometimes still are) fashionable arenas for preening and display. In the early 20th century, Paul Poiret took his hobble-skirted models to the races and caused a sensation – an idea also undertaken by other couturiers of the time, including Jacques Doucet and Lucille.

Backstage afterwards, Miuccia Prada said she was thinking about conservatism. “It’s a theme in fashion, but also a theme in reality,” she said, speaking abstractly of the mood of the times. She then immediately dismissed that. “I don’t want to be serious, when it’s Miu Miu.” The references here were Ladies Days, not only at Auteuil, but everywhere from the Prix de l’Arc de Triomphe, to the Kentucky Derby to Ascot (Mrs Prada hasn’t been). “There is also the English vision of Woody Allen movies,” she threw out – which you saw, in the pile-ups of tweed, just as the extravagant twofer hats (a broad-brimmed, My Fair Lady-scaled style usually plonked atop a baseball cap, as if the wearer couldn’t quite decide who she wanted to be on any given day) semaphored the dress of race-goers then and now. “It’s a conservative sport,” said Mrs Prada. “It’s a theme born from this place.”

The clothes had broader swipes at the horsey stuff: a print of jockeys riding trot montés derived from the work of American pop artist John Wesley, and others of horse shoes, as well as diamond patterned silks and knits based on those racing colours. The proportions were wide, the models trotted coltishly in thick-soled shoes in clothes that mixed conservative tweeds with laces and evening dresses, like 80s issues of Tatler come back to life. Sloane, in a word, although Sloane like we’ve never quite seen it, played out to Frédéric Sanchez’s typically fantastic soundtrack of, basically, every song with any association to a horse, including a break into the horny March of the Swiss Soldiers from Rossini’s William Tell Overture. Like everything else in this collection, it was a twisted take on classics – conservative Miuccia Prada certainly isn’t, even if the world around her is.