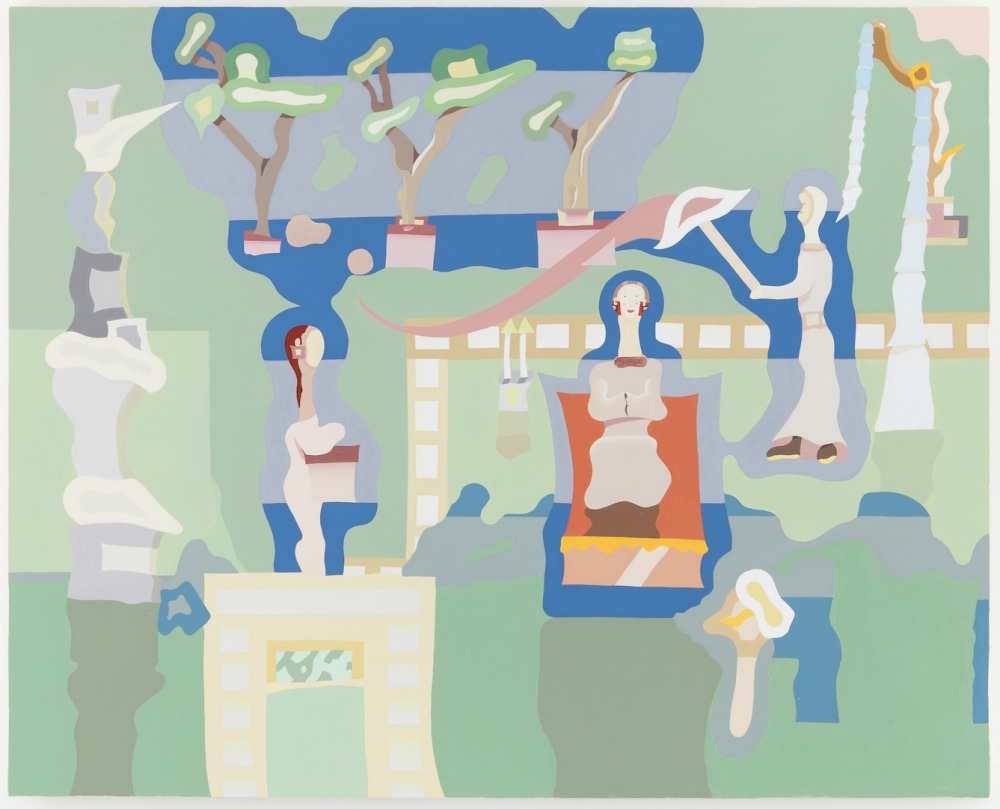 Weird never goes out of style. For proof, look no further than two exhibitions: Keegan McHargue's Prick of Conscience at Fredericks & Freiser, closing tomorrow, and Karl Wirsum's solo, opening on October 12 at Derek Eller Gallery. McHargue is in his early 30's; Wirsum, part of the fabled Hairy Who group of Chicago-based artists, is 74. (That's his painting, Your Call Cannonball, pictured to the left.) Yet both artists share a vision of the world that is manic, densly playful, and exbuerantly fucked-up.

McHargue has been making a lot of drawings in recent years, so it's nice to see him translating a similar aesthetic to an entire exhibition of paintings. At first glance their soft palette gives them the soothing appearance of children's book illustrations, or stills from tiny plays involving cut-paper puppets. A closer look serves up the truth, which is harder to stomach. (I've always found something awesomly difestive about McHargue's work, as if we're watching all of this deranged action as its being processed by some massive intestinal plumbing.) In Rift, starfish puke and a Merman drowns. Nymph of Lo looks comparatively benign, but it's still unnerving: Who are these monk like characters, smiling as if unaqare that they've been squased into two-dimensions, all notion of perspective run over with a steamroller? McHargue calls "Pricks of Conscience" the "most politically and socially charged work" he has ever made. The paintings, he tells BlackBook, came from a mixed bag of inspirations and influences: from the Fukushima disaster to silvio Berlusconi, ancient Chinese court culture to the aethetics of garden design.

It’s not hard to see why McHargue is a fan of Karl Wirsum. “The thing that I take most from Wirsum is his cleanliness,” he tells us. “I love that the ideas are perpetually over-the-top and semi out-of-control, yet there is an assuredness and mastery of medium within his work that let's you know that there is a man on the other end with his feet firmly planted on the earth. The idea comforts me.” Below, a few recent paintings and colored pencil drawings from Wirsum, on view at Derek Eller Gallery from October 12