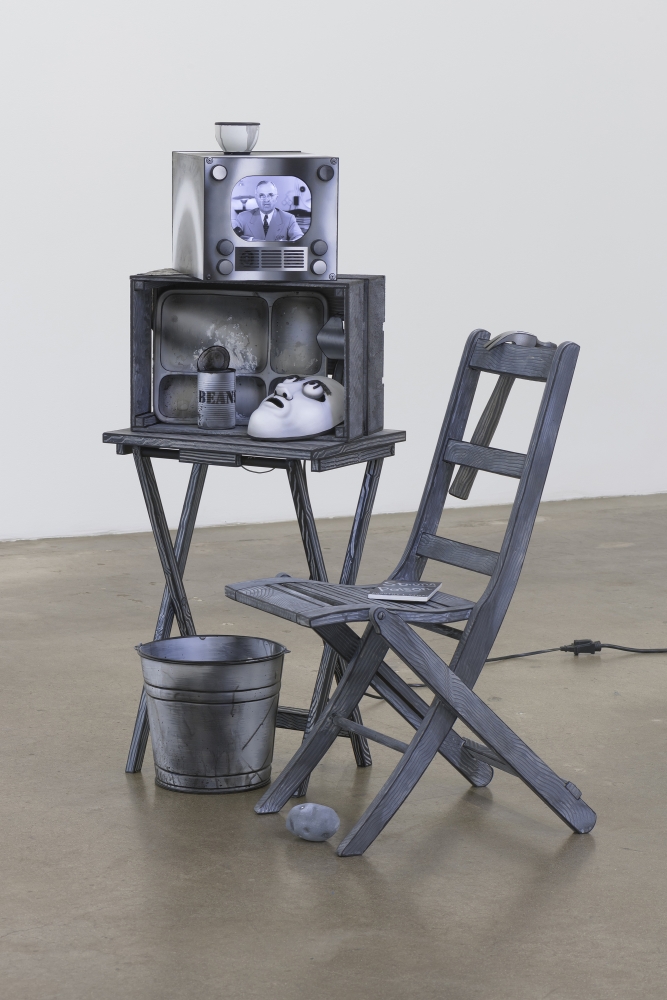 Harry S. Truman is an unlikely protagonist for a disorienting video plus a series of mixed-media paintings and sculptures by Mary Reid Kelley and Patrick Kelley. But he’s an inspired choice.

It’s the third show at Susanne Vielmetter Los Angeles Projects for the Kelleys, who are based in upstate New York. The setting of the video centerpiece is a submarine in the Pacific Ocean during the closing days of World War II, with the artists performing as characters in the video and photographs mounted in light-boxes.

The 33rd president was the bridge between mammoth wars — one hot, the other cold. The terrifying dawn of the nuclear age, when weapons of unprecedented intensity and power were actually used against an enemy in Hiroshima and Nagasaki, quickly became the threat of global annihilation, which formed the grinding context of everyday life for the next two generations. These are artists who think big, while employing modest means.

Stylistically, the work assumes a contemporary form of epic poetry, as if the “Iliad’s” Homer, “Mahabharata’s” Vyasa or the unknown “Beowulf” author were a current feminist equipped with a video camera. (Toss in Woody Guthrie too). Everything is rendered in black, white and gray — a cartoonish emulation of period photographs before color became the norm.

The style is also just wonderfully weird, as when the simple pinstripe of a photographed business suit turns out to be painted on, just like the wood grain of an actual ladder or chair in a couple of the sculptures. No one would mistake the painted president for a faithful likeness of the real person. All the world becomes a stage and Harry Truman, the Everyman President, just another player. (The artists too.) The Kelleys’ epic is humanized.

Strangely poignant, the video burlesque of life inside the submarine is difficult to follow — I’d guess intentionally so. (Patrick shot the narrative, Mary Reid played all but one of the parts.) Titled “In the Body of the Sturgeon,” the World War II story is set inside an underwater vessel not launched until the 1960s, long after Little Boy and Fat Man were dropped on Japan and the Pacific war ended — but the Cuban missile crisis was fresh.

The tale is loosely reimagined from “The Song of Hiawatha,” Henry Wadsworth Longfellow’s 19th-century Romantic fantasy of Native America. But it seems less about specific details of history than it is the incarnation of a crazed atmosphere of containment, madness and loss. Foundational mythologies deserve no less, and the Kelleys wield their aesthetic scissors to cut them up with rambunctious glee.