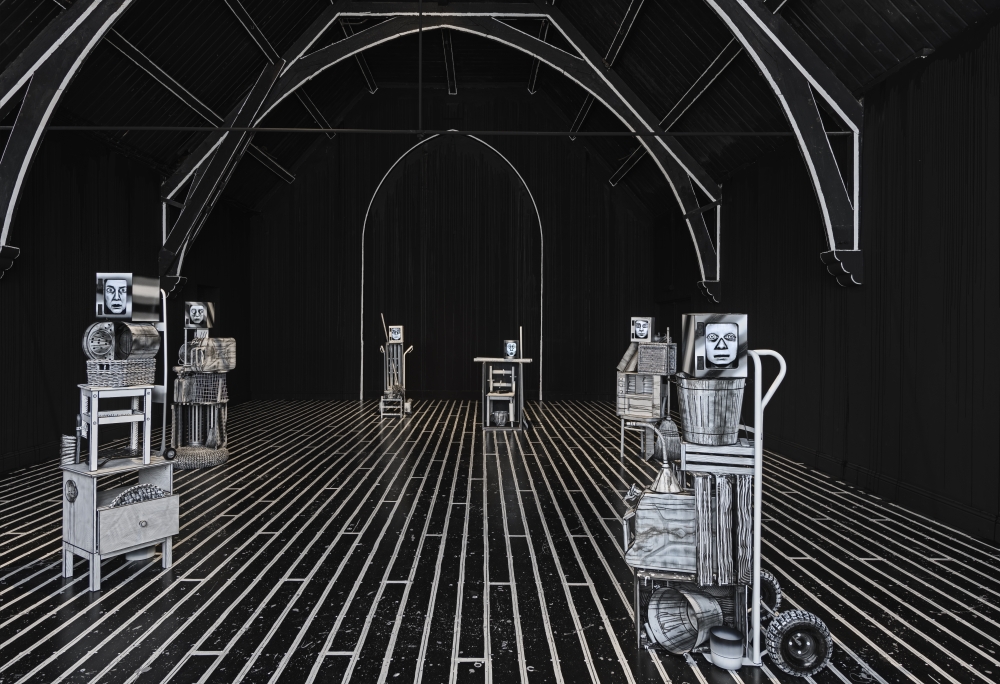 At Studio Voltaire, London, Mary Reid Kelley and Patrick Kelley take aim at #mefirst capitalism and the gospel of self-care

En route to ‘Rand/Goop’, Mary Reid Kelley and Patrick Kelley’s exhibition at Studio Voltaire, I ask myself a question: What does a mid-century rightwing zealot have in common with the face of the contemporary wellness industry? The answer: both are figureheads of #mefirst capitalism.

Russian-US writer and philosopher Ayn Rand and Hollywood-actress-turned-hippy-industrialist Gwyneth Paltrow are the protagonists of this journey into the cult of individualism — the last show at the Clapham venue before it closes for refurbishment until autumn 2020. Stepping inside feels like walking into a scene from a gothic comic. The interior and everything within has been painted greyscale with graphic white outlines. Spread across the floor are six monstrous anthropomorphic assemblages that bark out bizarre political slogans. The US artist duo concocted the script by splicing together headlines from Goop, Paltrow’s lifestyle website-cum-emporium, and comments made by of disciples of Rand’s death-to-taxes-and-welfare doctrine.

The ‘bodies’ of the sculptures are made from a combination of apparently benign domestic items and those that suggest violence. Along with mops, tables and chairs, I spot petrol cans (the cause of the drips on the walls?) and a spade spattered with a dark substance. Monitors placed on top of these constructions play videos of characters with mask-like faces, each performed by Reid Kelley. Their crass and jumbled features are part horror movie puppet, part cubist nightmare. ‘Health care is not a right to apply concealer to a television set and pretend you’re free,’ they declare in voices thick with militant rage. ‘Choosing the serum that works only on faith is known as the Middle Ages of self-improvement.’

Frankenstein-ing one woman’s philosophies with the other’s sales pitches asks the viewer to find affinities between two markedly different figures. Founded in 2008, Paltrow and Goop have become bywords for new-age charlatanism and the folly of the wealthy. The website has promoted products including a mugwort vagina steam-cleanse, face cream that’s been prayed over by beauty company employees and GB£99,000 18-karat gold dumbbells.

In contrast, Rand left Soviet Russia for the US in 1926. Upon arrival she embraced a particularly hardcore strain of capitalism and had the masterstroke of spreading her views through the medium of the blockbuster novel. Atlas Shrugged (1957) is a kind of Fifty Shades of laissez-faire capitalism – a romantic thriller in which tax-cutting is an aphrodisiac and women go weak at the knees for an executive willing to run roughshod over unions. No wonder she is so popular among the current US and UK leaderships, as well as the dubious overlords of the tech boom. Donald Trump and the British Chancellor of the Exchequer Sajid Javid are mega fans, as is former Uber CEO Travis Kalanick.

Paltrow is not an obvious heir to Rand’s throne. For one thing, Rand’s ideal vision of man tended to be, well, male. As an avowed atheist (something the Christian right largely chooses to ignore), she would probably also give short-shrift to Paltrow’s hokey line in spiritualism. Yet by placing their mantras side by side, the artists reveal the political genus to which the wellness industry belongs. Rand named the theory behind her fiction ‘objectivism’, a philosophy in which selfishness, not altruism, is considered an ethical ideal. Goop and companies like it thrive on a similar principle, repackaging egotism and cupidity as virtues.

In giving form to the demonically possessed offspring of libertarianism and self-care, the Kelleys show the ugly side of contemporary identity politics: righteous consumers, for whom a ‘me first’ attitude is not a shortcoming but a sacrosanct mission.