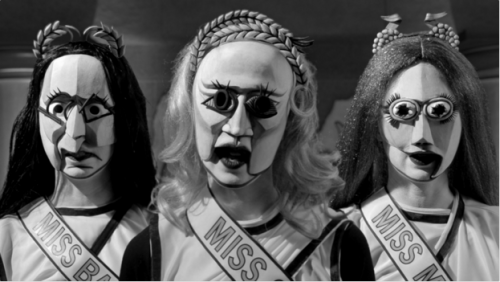 As part of the School of Art’s Monday Night Lecture Series, the two artists discussed the inspirations and production process of three of their most recent films, including “Priapus Agonistes” (2013), “Swinburne’s Pasiphae” (2014) and “Thong of Dionysus” (2015). All three are based on the mythological theme of the Minotaur refashioned in a modern but fictional world, according to the artists.

The stylistically similar videos feature characters who exist in a flattened black-and-white universe. The characters, who are cartoons, are masked and speak in verse. The films are reminiscent of Greek plays, especially tragedies, with their prominent chorus, dramatic verse and mythological stories, Reid Kelley said during the talk. She plays most of the characters in the films, who are direct reconstructions of famous mythical figures such as Priapus, Ariadne and Dionysus.

“Priapus Agonistes” is based on the church volleyball games she witnessed growing up, during which “gentle, professional men,” including her dad, “transformed into a caricature of male aggression,” Reid Kelley said. In the film, she pits the “Athens Baptist Church” against the “Knossos Presbyterian Fellowship” and satirizes the games. In it, the hero Priapus — the god of fertility who is known for his constantly erect penis — also appears and scores the winning spike for the Athenian team.

The second film, “Swinburne’s Pasiphae,” pays homage to the 19th-century British poet Algernon Charles Swinburne, who was known for writing about scandalous topics and dark themes. The film follows the story of Pasiphae, the queen of Crete, who falls in love with a bull, fornicates with him and produces the Minotaur. Lastly, the “Thong of Dionysus” focuses on Priapus’s encounter with the Minotaur and then Ariadne’s reflections on helping kill her half-brother and being left behind.

During the talk, the artists also discussed how multiple versions of the same myth exist due to the politics of ancient Greece. This film offered a new alternative to the myth, one that included a sorrowful abandonment, a rave disco party and an overly inebriated god.

Before each film, Reid Kelley discussed the various influences Greek tragedies have had on her life. She specified the difference between the language she uses colloquially and the figurative language she writes for her pieces. Reid Kelley added that poetry allows her to express herself, though that sometimes comes at the expense of clarity.

Greek theatrical masks were also a huge influence and are used prominently in the films, Reid Kelley said. However, instead of their traditional function — amplifying an emotion to make characters more sympathetic — these masks serve to hide the individuality of each character and force grander gestures for every expression.

“Masks cover the individuality of the performer, especially their eyes and expressions,” she said.

Reid Kelley also highlighted the personal aspects of the films. According to her, families are the “prerequisites of a tragedy” and in the storylines, she emphasized “how family can make you mad.”

Patrick Kelley spoke briefly about the production and the collaborative nature of the film, especially the difficulty of using one actress for multiple characters. He also discussed the editorial aspect of using green screens and editing the shots to make the figures interact.