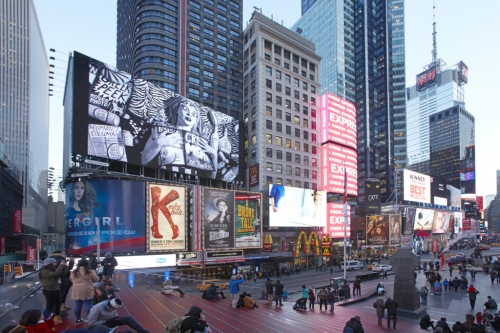 To kick of its 40th anniversary year, New York’s Public Art Fund is hosting its first city-wide installation, bringing video art to all five boroughs with “Commercial Break.” For the occasion, the organization commissioned 23 artists to create new site-specific work.

From Times Square, where the eagle-eyed can spot works by the likes of Cory Arcangel and Mary Reid Kelley and Patrick Kelley, and the Barclays Oculus, featuring Jacolby Satterwhite and others, to NYC kiosks across the city, including the Bronx and Staten Island, the show has unprecedented geographic breadth, and only the most dedicated art lovers will successfully see it in its entirety.

“As the title of the exhibition suggests, we’re literally breaking the commercial, the advertising cycle,” said Emma Enderby, who co-curated the show with fellow Public Art Fund associate curator Daniel S. Palmer, at an opening reception on February 6.

She was standing in front of a massive LED video screen that runs along the passageway between the Westfield World Trade Center and Brookfield Place. Every so often, the steady stream of ads—I particularly enjoyed the Cheetos “art museum” campaign—would be interrupted by a strange, somewhat soothing message reading “RELENTLESS TENDERNESS,” floating against a backdrop of abstract shapes.

This is the work of Hayal Pozanti, a New York-based Turkish artist. The shapes behind the words are a translation of the work’s title into a special language that she has developed. She explained that work is “counteracting the idea of a commercial which is very bright colors, fast-moving, there’s a narrative… I just wanted the feeling to go through the space rather than some kind of story.”

Pozanti’s piece is a brief 10-second interlude between ads that plays on all 19 LED screens at Westfield. In Times Square, at Barclays, and at the five selected LinkNYC kiosks, still images from a different artist are featured each day of the week between 5 p.m. and 7 p.m. The Public Art Fund website is also getting in on the action, with a video from Casey Jane Ellison.

“Screens are a very invasive part of our urban centers, they’re at street level, they’re above us they’re very much in our public spheres, but also in our private sphere, where we walk around with screens and advertisements in our pocket,” said Enderby.

Now, of course, the idea of a single screen in the heart of Manhattan seems quaint.

Palmer praised the participating artists for their technologically advanced work, and for taking “the opportunity to create works that are very poetic, and powerful, and address a whole variety of issues.”

The artworks, which sit at the intersection of the online and the offline, explore how the concept of identity is manifest, how images proliferate through memes, and how ideas are communicated in advertising. Together, said Palmer, they “say something that’s very meaningful and very profound and perhaps even hopeful and inspiring.”

The exhibition also marks an earlier-than-usual start to the Public Art Fund season, which traditionally kicks off in March at Central Park’s Doris C. Freedman Plaza, named for the institution’s founder. Next on tap for that site is Open House by Los Angeles-based artist Liz Glynn, who will recreate a Gilded Age ballroom from the historic mansion that once stood nearby.

“Commercial Break” is on view at the Times Square billboard at the southeast corner of West 47th Street and 7th Avenue; at the Barclays Center Oculus at 620 Atlantic Avenue, Brooklyn; at the Westfield World Trade Center at 185 Greenwich Street; and at LinkNYC kiosks at East 86th Street and 3rd Avenue, West 14th Street and 8th Avenue, Bowery between Houston and Delancey Street, Frederick Douglas Boulevard between West 123rd and West 125th Streets, and West 34th Street and 6th Avenue at Herald Square; February 6–March 5, 2017.