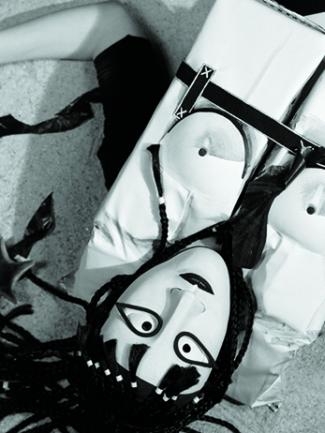 Consider black-and-white so complexly rich it seems like color. Add handmade costumes and sets that suggest Picasso channeling “Pee-wee’s Playhouse.” Then imagine fractured Greek mythology recited in a relentless hardcore pun-ography, with nary a line lacking a homophonic play on words. The resulting scenario gets you pretty close to what it was like to watch The Thong of Dionysus (2015), the video centerpiece of Mary Reid Kelley’s show at Fredericks & Freiser. Projected in a darkened room, and coproduced with her husband, Patrick Kelley, the 9½-minute video is riveting and fun to watch.

Thong (“song” said with fingers holding the tongue, as we see Dionysus do in the video) is so formally engaging that it can be entered at any moment and viewed indefinitely without one ever really understanding its puzzling narrative. It behaves more like a shifting painting, with movement substituting for expressive facture. Mitigating the ambiguous verbal content, Kelley maintains our attention through the invention of visual and aural patterns, rhythmic movement and transgender (and trans-species) eroticism, while referring to characters whose myths may be a little vague for the classically impaired.

The work combines a handmade look and a technologically sophisticated production. Kelley creates a panoply of action, the height of which may be when Dionysus and three maenads dance wildly while holding clunky pottery decorated with tiny digitally animated characters that move even as the vessels are hoisted. In addition to writing the script and designing the sets, props and costumes, Kelley portrays all the characters, male and female, using wigs, makeup, body stockings with painted-on breasts, fringed pubic hair and, on Dionysus, a disconcerting small prosthetic penis. All this is presented with a casually seamless digital panache, even when she plays several characters appearing simultaneously.

The script, in verse, with variable meter and rhyme schemes, puts myth through a blender and spills it on a psychoanalyst’s couch (“Let a liquid lunch launch us into the unconscious” is Dionysus’s Freudian statement as he imbibes on his chaise on Naxos). In addition to Dionysus and the maenads, Ariadne, the Minotaur (her half-sibling), Pasiphaë (their mother) and Priapus all take part. Disorientation seems to be the point, as we are constantly exhorted by Dionysus to get drunk in order to apprehend the irrationality of art and existence. Dionysus says:

Why hope like a dope for a world with some sense?
In the Labyrinth, everyone thinks they’re a prince,
In control of the string that will bring them back home.

The formal structure of the video, whose play of contrast and pattern and whose pace of editing echo the lyrics’ rhythms, becomes the foil for the demented narrative—a parable of letting go, forgetting and redemption through the embrace of absurdity. The work induces leaps of psycho-philosophical interpretation, which is indeed what gives myths resonance.

After surrendering reason to the illogical world of the video, it was momentarily comforting to see 18 small black-and-white portraits in the second gallery. Amazingly, these are actually photographs of sculpted and painted heads lit to appear as flat drawings. They caricature historic personalities, from Poe to Lil’ Kim, whom Kelley claims as her Dionysian inspirations. These characters share a style of makeup and costume with the mythological figures in the film, blurring the concepts of myth, history and popular culture. As a whole, the show served as the most recent example of Kelley’s ability to create intricate, cerebral narratives whose comprehension requires the suspension of rational thought.