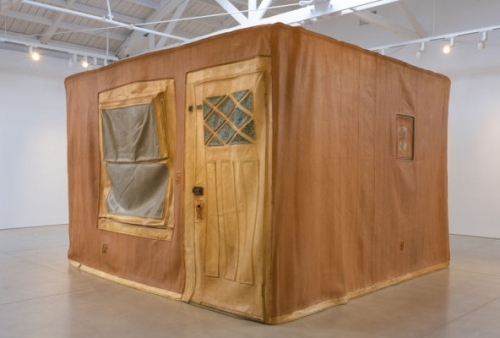 Twenty-some years after his death at the age of fifty-six, Robert Overby is finally getting his due--both in Los Angeles, where he spent most of his career, and in cities considerably farther afield. (A show at the Hammer Museum in 2000 was a decisive moment in this trajectory, though its effects were not immediately evident.) The most comprehensive survey to date, "Robert Overby, Works: 1969-1987," organized by Alessandro Rabottini in 2014 for the Centre d'Art Contemporain, Geneva, contributed significantly to the mounting sense of excitement around the artist's work. The openness and range of his output, from his castings of extant architecture to this polyurethane stretched sculptures, collages of found porn, and high-keyed paintings of cropped torsos, masked faces, and gloved hands--bondage and bandage--seem especially vital when seen from our current vantage point. Curated by Overby's partner, artist Linda Burnham, "Absence as Presence: Erasure, Trace, Eradication, and Lack" included only two of Overby's late paintings but brought together tender, dimunitive oil and pigment monochromes with corrugated and aerated coats; an acrylic rendering of a bespectacled John Lennon in a gaucho hat; insistently sketchy carbon-transfer drawings; a milk-chocolate doorstop (newly cast as an edition of one hundred by the artist's estate, in the absence of the original eated by Overby and friends); and a peachy-tan, skin-like room-within-a-room of strug-up latex rubber.

As the show’s title suggests, Overby delighted in the intransience of his materials. Rather than rendering his objects impervious to time, he exacerbated their inherent precariousness. This dynamic was evident throughout the gallery but was perhaps most salient in Living Room, Paul’s Place, 1971, the aforementioned full-scale latex cast of the interior and exterior of his brother’s room—wood panels, baseboards, framed art, wall heater, windows, and door intact, the whole enclosure affixed to an armature mounted on the floor. The rubbings—such as Carbon Transfer Drawings on Three Hole Paper, 1970, crisscrossed by gray squiggles that never cohere into a recognizable form—perform a similar translation and register simultaneously as image and index. Traces of things long gone are preserved severed from their sources, and their very resonance relies on the loss of their referents. Untitled (Leonard’s Landscape Erased), 1973/1980, is bordered in hot fuchsia, but the rest of the work’s surface seems winkingly to highlight the pentimenti in a composition produced via effacement. The piece is also, perhaps, compensation for something lost. The insistent materiality of Overby’s work fills the void of the elusive presence he seems to have been after.

The three reliefs constituting Projected Space Between My Legs, 1970, were installed in a side gallery surrounded by other sculptures—three smaller objects in vitrines (the milk chocolate Door Stop, 3 May 1973, and the resin Monkey Grip and plaster Trilobite, both 1970), as well as a wonderfully perverse wall-mounted assisted readymade of a wheel tethered to a long leather leash (Allusion [Walking Wheel], 1971). The artist had previously photographed Projected Space outside for his self-published catalogue Robert Overby 336 to 1: August 1973–July 1969 (1974), which presents the work within a landscape. In this exhibition, the three reliefs rested on a bed of sod installed on the gallery floor. Like their photographic predecessor, which implied a before and after via the trampled blades that suffered the work’s comparatively crushing heft, the installation gestured to its own temporality, elegantly anticipating the dissolution of the scene upon the completion of the show. In this sense, it was—in its bodily contours specific to its maker—a poignant and particular memento mori that pointed to the person missing but everywhere felt.