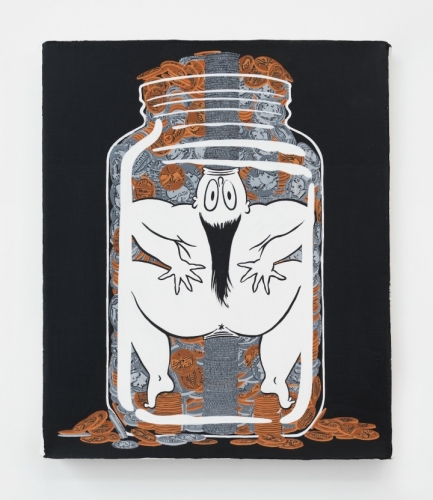 When Ebecho Muslimova began drawing Fatebe, her alter ego, around 2011, she initially existed only as confidently drawn black ink lines on small sheets of white paper. In a drawing included in her first solo show at Room East (2015), Fatebe is hunkered down, a mad smile on her face, digging a hole and happily flinging mud balls over her shoulder. In another she is scrunched up and flat on her back, crumpled like a collapsed ceramic in exasperated surprise.

Fatebe is a female Buster Keaton enduring humiliation upon humiliation. She has straight black hair and is always seen in her birthday suit, her vagina often exposed. She is zaftig, muscular, and irrepressible — a contortionist performance artist whose only audience is the viewer. The situations she finds herself in are weird, funny and oddly sinister: they have to do with every part of the body and everything the body produces. Shit, piss, and flatulence are all part of the situations that Muslimova depicts with a fluid line.

Her latest exhibition, Ebecho Muslimova: 2017, at Magenta Plains (January 7 – February 11, 2018), includes something new: in addition to the ink drawings, there are four paintings, three of which are large. It is a bold move that may put off some of her fans, but shouldn’t.

The small, largely black painting, “Untitled (Jar)” (2017), shows Fatebe stuck inside a white, outlined jar, her flattened white body resembling an overhead view of a frog. With her two big elliptical cartoon eyes upside-down and staring directly at the viewer, perplexed, she is squashed against the glass by the contents of the jar, a trove of gray and copper-colored coins, from quarters to pennies. A column of gray coins descends unimpeded from above the overflowing rim of the jar into Fatebe’s open, upturned mouth and out of her stretched-open vagina.

This is what Muslimova does best: she presents a situation where the viewer is hard put to figure out how Fatebe ended up in such circumstances. For all the shame and mortification her alter ego is subjected to, Muslimova never reveals the source (or points a finger), making what could easily be a didactic view into something bizarrely enigmatic.

This is one thing that sets Muslimova apart from other artists working graphically, often in black-and white. I am thinking of Raymond Pettibon and Steve Gianakos. The shame and embarrassment that Gianakos’s figures suffer through don’t invite the viewer’s empathy. Pettibon and Gianakos make work that is confrontational and, frankly, male. In Fatebe’s world, there are no men: they are irrelevant.

The other difference has to do with the source. Pettibon is often inspired by current events, while Gianakos has long mixed pornography with images of happy children taken from illustrated books. Fatebe is Muslimova’s invention, which is every cartoonist’s dream — to make a memorable character. She appears to be asocial, and the only being with whom she interacts is her reflection or manifestations of herself. Carroll Dunham could learn a thing or two about nuance from Muslimova.

In one of the large acrylic paintings, “Fatebe Aspargus Pee” (2017), Fatebe is squatting with legs apart upon a pyramidal stack of toilet paper. The roll at the top is a sickly yellow, which becomes lighter as it spreads downward through the tiered toilet paper, though the bottom row remains pure white, apparently spared by Fatebe’s pee. Meanwhile, she is clasping her hands together and holding a bunch of asparagus stalks in the crook of each elbow. Another two bunches are tucked between her forearms and her breasts. Finally, Fatebe flings back her head, her open mouth crammed with more than a dozen asparagus stalks, as if her mouth were a vase. Muslimova’s riff on the trope of woman as vessel is a perverse celebration of olfactory delight.

In “Fatebe Self Possession” (2017), Fatebe’s limbs are bent around the edges of the canvas like a rectangular donut, so that she is looking down into her wide-open vagina, which contains an overhead view of a stairwell receding down to a patterned carpet in red, orange, and black. Fatebe is filming the receding set of stairs with an old-fashioned movie camera. Three Fatebes peer up from different places on the staircase. The carpet at the bottom, framed by the staircase, is the only color in this otherwise black-and-white work. Fatebe’s self-obsession — of which there is a trace in all of the work — is given the full treatment in this painting. And yet, contrary to what you might expect, the narcissism comes across as peculiar, even benign: she is making a film of her other. While Fatebe might not embrace multitudes, she does contain mirror-likenesses that are up to something, who knows what?

In “Fatebe Rack” (2017), Muslimova uses color graphically, filling the ground with a solid green. Fatebe is folded over so that her hands are touching her feet, entwined in the bars of an unfoldable laundry rack, which, for some inexplicable reason, is rising out a child’s black rubber wading pool (or oversized washtub). She is staring into the water, which goes from pale pink to pale blue, reflecting the unseen sky above. This mirroring is echoed by Fatebe’s dark blue reflection in the water, which is staring up at the figure perched above, and gives the painting a spatial dimension that Muslimova has not previously brought into her work.

As one might expect, Muslimova paints tightly and graphically, and her paintings share something with those of John Wesley. Fatebe seems to exist in what Jacques Lacan called the “mirror stage,” which is supposed to happen during early childhood, when the infant becomes fascinated with mirrors. While this theory has long since been discredited, what Muslimova does is create a character that is innocent, curious, and fascinated by her reflection. No matter what fate befalls her, she remains remarkably imperturbable. This is what I think Muslimova’s fans adore about Fatebe — no matter what happens to her, Fatebe accommodates herself to the situation and she never gets knocked down.