Kathe Burkhart
Whip it Out: from the Liz Taylor Series (Reflections in a Golden Eye), 2012-2013
Acrylic, fake money on canvas
90 x 60 inches

Love is Just a Four-Letter Word

Fredericks & Freiser is pleased to present an exhibition by Kathe Burkhart. Ongoing since 1982, Kathe Burkhart's Liz Taylor Series has evolved into a serial performative life work that draws from traditional worldviews involving presumed emotional "truths" put forth in painting and cinema. Its graphic images cut deeply both ways — for Liz and those depicted around her; for the artist and viewers alike. In works on canvas, images of Liz Taylor drawn from film stills, press and archival sources are overlaid with singular typographic profanities to provide a seemingly vast platform in which Burkhart addresses feminist resistance, female dominance, and sexual power. Love is Just a Four-Letter Word includes works on canvas from the series ranging from 2007-2016, as well as works on paper depicting the star from 2005-2015. Her glow-in-the-dark painting “S’nuff: from the Liz Taylor Series (Ash Wednesday)” from 2016 will be installed in the gallery’s 24th Street window for day and night viewing.

When, in hundreds of paintings, the image of Liz Taylor is invoked, a sizable register that includes her beauty is correlated with otherwise abrasive, aggressive, histrionic, and unfettered attributes to deliver a form of debasement administered through deconstructions of iconic representations of the star, combined with graphic direct addresses. Like one of her favorite Liz Taylor movies, Who's Afraid of Virginia Woolf, Burkhart brings us foul language as a device that ruptures too-lengthy silences, deploying anti-formalist strategies to address various systems of oppression, including language. As in Edward Albee’s play, psychological sport, verbal taunting, and

manipulation of power are at work; and Burkhart, as well, goes too far with the fun and games, leaving scars after uncomfortable laughter. As Gary Indiana noted of Burkhart’s Liz Taylor Series, “Deflationary of our system of illusion and manipulation, they affirm the act of making-conscious. They raise the ante of awareness beyond the perceptual fence surrounding our collective penitentiary [and] indicate our complicity with oppression of all sorts, while suggesting where its logical dead end must certainly be: the stab we deliver to ourselves, the ultimate wrong targets.”

Trained in the theoretical traditions of conceptual and feminist art, versed in ideas of deconstruction and appropriation, Burkhart's work came of age in the late ‘80s and early ‘90s, yet resisted the packaging of a period that fetishized technique and delivered a diffused form of feminist art that devolved into a representational painting style practiced by women artists, rather than manifesting transgressive potential. Remaining persistent in her visual articulation of the radical female subject, Burkhart continues to make Liz Taylor paintings that corrupt the master's tongue with curses, as well as the master's tools in painting, mounting a conceptual assault on the proscribed roles assigned to women. Although Burkhart makes paintings, she does not consider herself a painter. She works in a variety of interdisciplinary media, making video, installation, performance, photography, and sculpture; and writing fiction, poetry and criticism. Her performative, language-based practice, in general, comprises an accumulation of photographic and typographical research, writing alone and alongside others, and the combination and reproduction, by hand, of existing representations. Gleaning the clandestine oppositional substance that lies dormant in seemingly passive inflections, she, like writer Sissy Goforth (Liz Taylor's character in Boom!) plays by her own rules.—Lia Gangitano 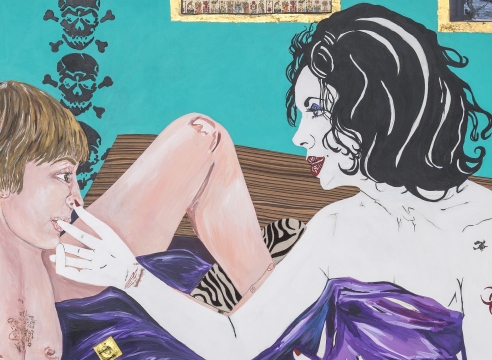